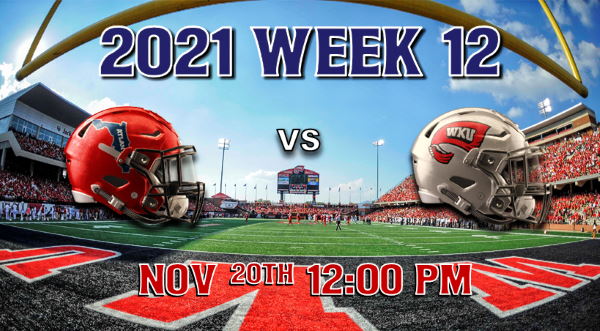 The Series: While taking the last four in a row, the Owls hold a 9-3 advantage against the Hilltoppers, with the most recent being a 10-6 win at Howard Schnellenberger Field November 7, 2020.

It's do or die for the FAU Owls.

With a 30-16 loss to the ODU Monarchs, Florida Atlantic finds itself dashing for a win to become bowl eligible. Just two weeks ago, they had C-USA Championship aspirations in mind, holding a share of first place in the C-USA East division before losing their next two games.

A lot of it has to do with the one dimension offense the team runs. It relies on deep passes, which do hit every so often and showed with N'Kosi Perry's 59-yard touchdown pass to Brandon Robinson on Saturday, but makes for a very quick end to a drive if the passes aren't converted - which also happens very often.

FAU did improve in that area last week, only going three-and-out once, but they struggled near their own goal line, with Perry taking two safeties that made it a 4-3 game at one point.

Defensively, everything was left to the safeties, with Jordan Helm and Teja Young combining for 27 of FAU's 104 tackles on Sunday. Both Helm and Young are incredible field generals and are able to shoulder that responsibility, but a lot of those plays happened because FAU let ODU make plays that ended in the secondary rather than stopping them short.

That should be another thing to watch going into this week's game against Western Kentucky. 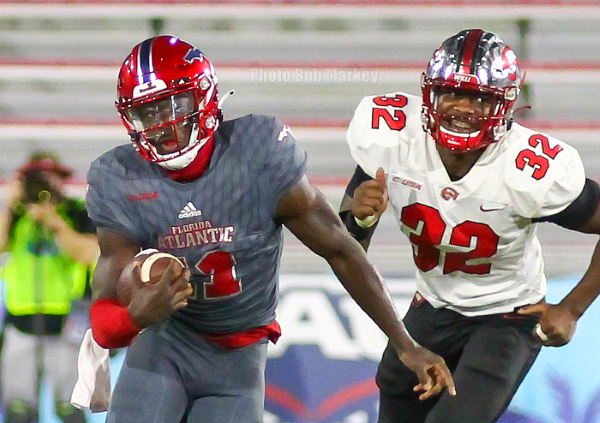 Bowling Green, KY - home to one of the country's best quarterbacks this season.

Leading the nation in both passing yards (4,170) and passing touchdowns (42,) Bailey Zappe proves to be a huge threat for the FAU defense and one that the Owls' offense might not be able to keep up with.

The Hilltoppers have, by far, the most effective passing offense in the league, averaging 423.7 yards per game through the air. They're the only school in the nation with over 400 - with second place Virginia having 380.5 - a 43.2 yard per game margin. FAU ranks 65th in passing defense, allowing 228.7 passing yards per game, so it could prove to be a challenge for them, especially while they're in danger of being without corner Diashun Moss for the third week in a row.

One way the Owls can get into this ball game is if their passing plays hit. Western Kentucky's 110th ranked passing defense allowed 265.7 passing yards per game, so that could open up opportunities for some deep balls.

#FAU's @CoachTaggart after the #ODU loss: "The locker room was different. The guys were disappointed, frustrated, upset. We are all disappointed in the way we played and letting the game get by. Everybody is working hard, but we need to work to get this right." pic.twitter.com/00mXkrFC1J

Coach says that the entire program needs to be accountable for the ODU loss.

#FAU's @CoachTaggart says everybody needs to work to get out of this slump. "Both players and coaches need to be accountable to make things right." pic.twitter.com/1eyFiEhFmw

Coach Taggart wanted the team to see what they did right and wrong with one another. They want the players to support one another in their success and be accountable for each other in their wrongs.

#FAU did not watch the #ODU film in position groups, "instead we watched the game film as a collective." @CoachTaggart added the whole team, players and staff. "We wanted to see what we did wrong as a collective." pic.twitter.com/ncm65F3Yr1

Coach Taggart is saying that WKU's Bailey Zappe will absolutely be an NFL quarterback.

Last week it was the players taking responsibility, this week it's everybody. If we lose to WKU, do think WT will finally take responsibility? IMO - probably not…..

This is going to be a butt kicking

I reported that it seemed like it was moving in this direction, but now it's confirmed. Duashun Moss will miss the remainder of the campaign due to a season-ending surgery.

CONFIRMED: #FAU DB Diashun Moss is out for the remainder of the season. Get well soon, Diashun!

Owls will be shorthanded against #WKU's high-octane passing attack. pic.twitter.com/8ugWa0Dqv7

Coach Taggart wants all the players to give their all to finish the season strong. FAU will need to win one of their final two games of the season to become bowl eligible.

#FAU's @CoachTaggart knows that his Owls have their back to the wall. "There needs to be a sense of urgency. Everybody needs to give their all to make sure that these seniors go out the right way." pic.twitter.com/dLcJckb2u3

A graduate of WKU, Coach Taggart says Bowling Green is a special place for him and his family. He says that he will "have to see if they still have my jersey up in the stadium" now that he's on the opposing sideline at Smith Stadium

#FAU's @CoachTaggart on traveling to #WKU to face his alma mater: "I am who I am because of WKU. I met my wife there. I have my beautiful kids all because of WKU. It means a lot to me and my family. It's a special place that we try to go back to every year."