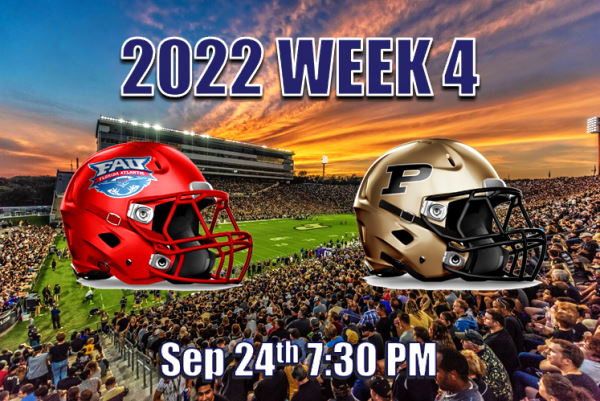 The Series: First meeting between the two programs

Coming off a blow out loss to UCF, with some players still banged up, the Owls would be better served with a drop in the competition level.

However that won't happen with Big Ten opponent Purdue up next. Like UCF, the Boilermakers are stingy in the passing yards allowed department, and will put more pressure on the FAU running back room to produce.

So far, the emergence of the one-two combo of Larry McCammon and Zuberi Mobley (photo below) has met the challenge - against all levels of competition. 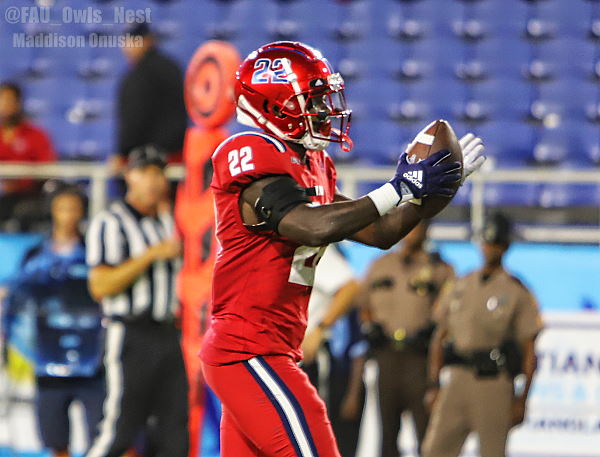 Regardless, more is needed out of the passing game from a consistency standpoint as N'Kosi Perry's numbers took a swipe with a 13-of-29 showing a against the Knights.

Florida Atlantic should see a slight dip on coverage efficiency though when compared to the UCF secondary, and that may be just enough room to squeeze in a few more well timed balls. The Boilermakers are also not as effective in getting stops on third down, something which plagued FAU against UCF.

Most of the players who have been sidelined as of late made a return last night, while Evan Anderson will receive a new prognosis this week and could go from out to possible. Secondary staple Romain Mungin left the contest while needing assistance off the field but appeared to be ok after the contest. He's currently 4th in total tackles and is listed and an official status is expected tomorrow. Safety Teja Young should be another player in the mix for return.

After a soggy saga FAU will get a chance to dry out after a week of rain locally, while also enjoying their first taste of cooler air for the 2022 schedule. Temperatures are expected to be in the mid to upper upper 60's for the entire game in West Lafayette.

While Purdue will be a new opponent for the Owls, head coach Jeff Brohm is a familiar face for the FAU faithful. Brohm served as the Owls' quarterbacks coach in 2009 under the direction of Howard Schnellenberger (his former head coach at Louisville).

FAU is 1-2 all-time versus Brohm, each of the three coming while he served as WKU's head coach.

The Boilermakers suffered a close loss to Syracuse on Saturday, dropping a 32-29 affair on the road. The Owls will be the homecoming opponent for Purdue, as they will have spurn as a motivating factor to get back on track.

Quarterback Aidan O'Connell has been accurate in his pursuit of the 1,00 mark which he hit this past weekend on the nose. He's clipping along at 65% on the young season and will present some potential adversity for the FAU secondary as passing is the primary point of attack Purdue employs.

Favorite target Charlie Jones has 474 yards under his belt and is averaging nearly 15 yards per catch. The backfield hasn't seen a lot of productivity, and employs four primary options with redshirt freshman Devon Mockobee (100 yards, 21 carries) leading the way.

The Boilermaker defense has seen production spread fairly evenly over their three contests, with safeties Sanoussi Kane (17) and Cam Allen (13) leading the pack by a few take downs each. 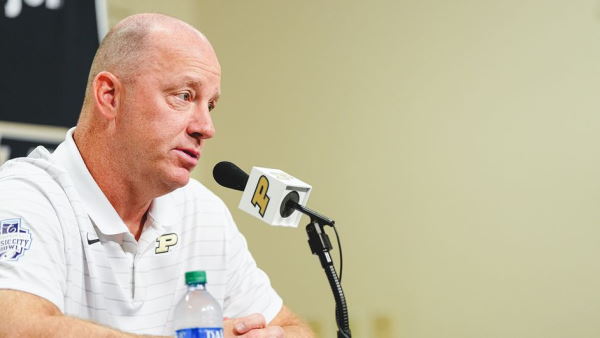 "I know as well as anybody that Florida Atlantic has talent, and they always will because there's a broad base of guys in the state of Florida that you can recruit. They do a great job with it.

So, this is going to be a challenge. This team has good athletes, and they have size that you are supposed to have. They have good coaches.

So, just like every week, if we don't get better at the things that have been biting us in the rear end and improve on becoming more efficient, we're not going to win the football game." - Purdue Head Coach Jeff Brohm
E-Mail: rickthendersonjr@gmail.com

Hope we make some adjustments and execute on the plays. Play a clean game, no fancy/pretty football, just run a clean spread. I want to see improvement in this game going into conference play the following week.  I know they are P5, but we need to at the very least compete like other G5 schools do vs P5. Go Owls 🦉!!!

Had a chance to swap intel with Travis at Hammer and Rails…will post his a little later, but for now here is ours.

Interviews with the enemy: A Q&A with The Owls Nest
E-Mail: rickthendersonjr@gmail.com

I would not read too much into this.
Purdue will be ready.

Anyone who does not have B1G Network, you can sign up for a free 7 day trial with Fubo and stream it online, either from phone, tablet, or laptop. It is also on Roku.

Here with Smitty and others in Lafayette at Walts Pub.
Great weather today for a football game.
FAU - THE REAL SLEEPING GIANT