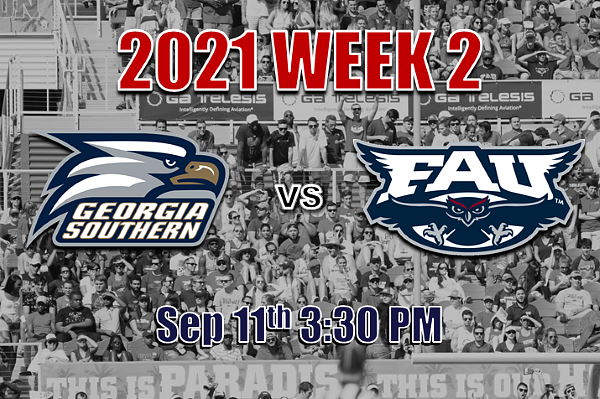 The Series: The Owls and Eagles played each other for the first time last season, with Georgia Southern taking a 20-3 victory on Dec. 5, 2020. FAU turned the ball over four times, with Javion Posey throwing two interceptions.

Despite the loss to Florida, FAU left Saturday's game with some positive takeaways. For one, a new weapon in the offense emerged in D'Marcus Adams, who caught two passes for 85 yards. Adams only started working with the wide receivers about a week and a half ago after transferring in from Florida State as a cornerback. The 6'0, 180-pound receiver provides a lot of speed to the receiving core and could be another weapon in the arsenal of starting quarterback N'Kosi Perry.

Speaking of Perry, he shined in his Florida Atlantic debut. Despite being sacked six times, he managed to throw 19/33 with 261 passing yards and a touchdown. He was being pressured all game by Florida's dangerous defensive front and he showed poise by not throwing a single interception. There were a few offensive miscues that resulted in two fumbles, but the first of the two wasn't his fault, as there was a missed assignment on the offensive line, leaving him as a sitting duck on the play.

The biggest area of concern for FAU, however, was their ability to stop the quarterback run game, especially going into this week's game against a school that notoriously uses the triple option. Between quarterbacks Anthony Richardson (160 yards) and Emory Jones (74 yards), the Owls gave up 234 rushing yards to Florida's signal-callers. In total, they gave up 400 yards on the ground, so the run defense needs to improve against a run happy offense in Georga Southern.
. 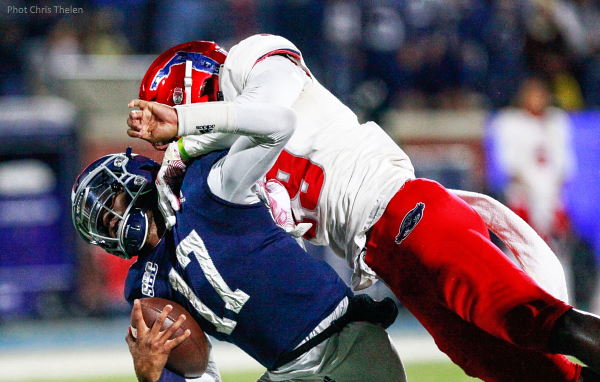 Georgia Southern is coming off of a nailbiter of a 30-25 victory over Gardner-Webb. After going into halftime up 20-6, the Runnin' Bulldogs went on a 19-10 run to bring the Eagles to the brink. It took a sack from Khadry Johnson with Gardner-Webb driving down the field for Georgia Southern to hold on and win the game.

The Eagles are now led by freshman quarterback Cam Ransom, who passed for 90 yards and a touchdown on 8/13 passing. GSU also utilized Amare Jones, who rushed for 98 yards and passed for 45 yards on 4/7 passing. Last year's starter, Justin Tomlin, also remains on the roster as a third-stringer. The redshirt junior had 70 passing yards on 3/12 passing and added 78 yards on the ground.

With Georgia Southern presenting a unique personnel group that can take advantage of FAU's weaknesses, the Owls are going to focus on stopping the run game. Running back Logan Wright makes that even more evident. During last week's game, he had 178 yards of rushing on 28 carries with a touchdown. Last season, he had 602 yards and four touchdowns on 99 carries, being one of the most explosive runners in the country.

Coach Taggart says the team failed to bring a complete package against UF, but says that it is a learning opportunity heading into this weekend.

#FAU's @CoachTaggart on last week's loss to #UF: "We didn't play winning team football. Our defense got two turnovers, 7 out of 11 drives beyond midfield, but we couldn't finish." pic.twitter.com/5PbEzyCfkR

CONFIRMED: Chase Lasater is back.

He lead the team in tackles in last year's game vs. Georgia Southern.

"Chase is back."#FAU Head Coach @CoachTaggart says that @ChaseLasater is BACK and will be ready to play on Saturday vs #GSU. pic.twitter.com/56vvBmMWj1

Ahman Ross didn't see the field often last Saturday night. Coach Taggart says that will not be the case this weekend.

"He had to miss a couple practices last week, nothing discipline-wise. There were a few things he had to get taken care of and he missed some reps." pic.twitter.com/qR7OjODWSC

Take this week to improve on the mistakes they made against Florida. And get rid of the package with spreading Perry to wideout to use Posey as a Quarterback. If youre going to use Posey use him like you did last year.


100% my attitude.  Until we don't start $50,000,000 a year behind these type schools in athletic budgets there is no real expectation to truly compete.
Teambeer is the most knowledgeable FAU sports fan I know, way smarter than me.

#FAU PrOWLers is getting the student body HYPED for Saturdays home opener. 🔥🔥

Theres still time to get to FAU Stadium for a FREE SHIRT! pic.twitter.com/gARTmjpxTX

About to get our last crack at Coach Taggart before Saturday's contest.

Expect some talk about The Celebration of Life of Coach Schnellenberger event tomorrow evening.