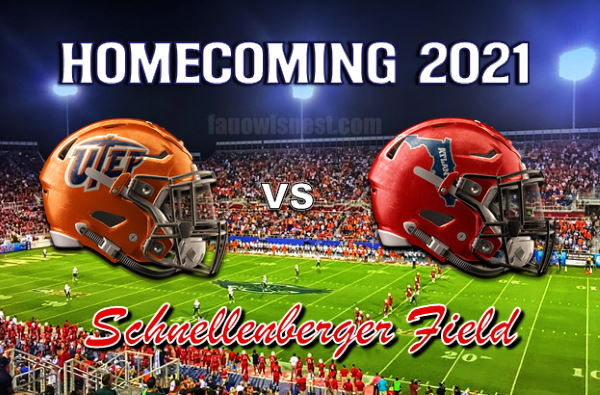 The Series: The Owls and Miners have split their two matchups so far, with FAU winning the last matchup on Nov. 12, 2016, by a 35-31 margin at FAU Stadium.

After losing their first three road matchups of the season, Florida Atlantic snapped its losing skid away from home with a 38-9 walloping of the Charlotte 49ers. After averaging just 93 rushing yards in their road games, the Owls picked up 202 yards on the ground - with Johnny Ford picking up 92 of those with a touchdown on eight carries. Quarterback N'Kosi Perry had one of his best performances of the season as well, throwing for 225 yards and three touchdowns on 9-11 passing.

Head Coach Willie Taggart mentioned that their offense starts with the run - and that was exactly the case with the offense rushing the ball 40 times to just 11 pass plays. Winning the turnover battle also helped FAU win last week, as they had three takeaways to Charlotte's one. This was also one of the best showings from the defensive line this season, as Evan Anderson [photo], Jaden Wheeler, and Jaylen Joyner all each had four tackles - with Anderson notching a tackle for a loss.

With one of the most complete performances they've had all season in the rearview mirror, the Owls will look to build off of that - and they are returning to the friendly confines of Howard Schnellenberger Field. They're on an 11-game home winning streak and are looking to extend it to 12 against the Miners. 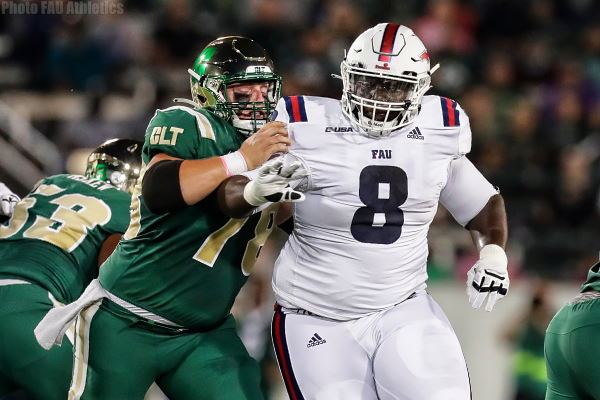 One of the big surprises out of the C-USA West division, the UTEP Miners are off to a 6-1 start, including a 3-0 start in conference play. The Miners have been known for stopping the run thus far, ranking 11th in the nation in fewest rushing yards allowed per game, only allowing 94 yards on the ground per game. They've also forced the 19th-most turnovers per game in the nation with 1.9 per game.

The head of the turnover party in El Paso is defensive back Dennis Barnes, who has two interceptions and a fumble recovery along with 34 total tackles and a sack. DB Dy'vonne Inyang makes for a solid duo with Barnes, adding two picks of his own while matching Barnes' tackles and sacks total.

Offensively, Jacob Cowing ranks as one of the best receivers in the nation. His 775 receiving yards on 35 receptions ranks him sixth in the nation, adding four touchdowns as well. Quarterback Gavin Hardison also ranks among the top QBs in the nation, ranking fourth in passing yards per attempt (9.8) and adding 1,549 yards and eight touchdowns on 57.6% passing. The Owls have to capitalize on his risky passing, as he has seven interceptions on the season - the Owls defense has eight interceptions as a defense this season, including three against Charlotte last week.

Looks like both Moss and Mungin are "probable" to play against UTEP's solid passing attack.

After going down in Thursday's game, Diashun Moss and Smoke Mungin are practicing. They're probable for Saturday's game per #FAU coach @CoachTaggart. pic.twitter.com/r8mseGTLB3

#FAU HC @CoachTaggart on @AhmanRoss throwing his first INT ball to his mom:

"I think you can see where Ahman got his athleticism from, a lesser athlete would've fell there, but she showed her athletic ability and caught the ball and stayed up." https://t.co/bnNV1YmVnt

Coach hopes to continue his dance moves after the top teams from each division clash Saturday night.

#FAU HC @CoachTaggart on the little dance he did postgame:

I was excited about the win and I saw @ko_live5 talking and I figured Id throw up the Owl sign.#GoOwls 👌👌 pic.twitter.com/iORMk5lhO6

Here's what UTEP Head Coach Dana Dimel had to say today on their upcoming tilt against the Owls:

Super excited for this game against UTEP.

@Jack always enjoying listening to the podcast and hearing your take!

Coach Taggart with some praise for the UTEP Staff:

#FAU's @CoachTaggart with high praise for #UTEP. "@UTEPFB Coach Dana Dimel has done a great job. Think about where his team is now. They've done a hell of a job of turning it around and having the program going in the right direction." pic.twitter.com/rMU9jXdy9b

"If we're going to be the team we want to be, we're going to need them to make more plays for us. And that means we have to put them in position to do that." pic.twitter.com/l8BxFtSlk7

Super excited for this game against UTEP.


Much appreciated! This game is really tough to call, but FAU surely has the talent to beat anybody remaining on the schedule.
When I'm not in school, I'm schooling the CUSA Twitter game; Follow Me Here

This game I think will be a close one and come down to whoever has the ball last. We should be good if we limit the mistakes.