Being new to C-USA, is it typically a 1-bid or multi-bid league?  Sounds like many talking heads still believe MTSU will get into the big dance, meaning multiple teams from the conference make it.  That is going to be bad news for some P5 school.


Does Middle Tennessee deserve an At Large Bid due to their résumé? Yes.

Will they get snubbed by an undeserving team like Oklahoma or Notre Dame because of their "$trength of $chedule" or "quality lo$$e$?" Most likely yes.

Oh how silly of me, I accidentally used the Dollar sign when quoting the Selection Committee…. oops……..

Here is the updated bracket following the Quarterfinal Round. 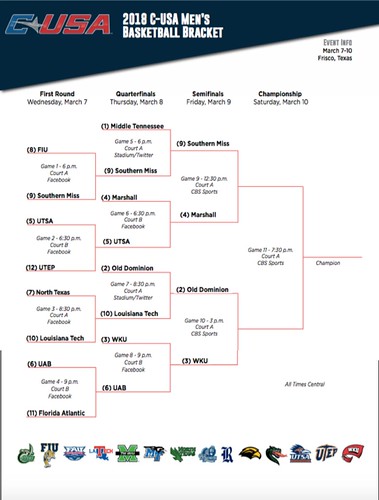 Behind a near triple-double from Jon Elmore, Marshall moved past Southern Miss, 85-75, in the semifinals of the 2018 C-USA Mens Basketball Championship. The fourth-seeded Thundering Herd (23-10) will advance to the title game for the second consecutive year on Saturday.
E-Mail: rickthendersonjr@gmail.com

A semifinal that produced slow offensive start turned into an action-packed finish as No. 3 WKU sent No. 2 Old Dominion packing behind a 57-49 loss Friday afternoon. WKUs Justin Johnson manufactured his second-straight double-double of the tournament, turning in a game-high 13 rebounds and 19 points on 7-of-12 shots from the field. The Hilltoppers will appear in its first C-USA Championship game at 8:30 PM on Saturday against No. 4 Marshall.
E-Mail: rickthendersonjr@gmail.com

And then there were two…

The C-USA Championship will be TONIGHT, 8:30 Eastern on CBS Sports Network.

Hope you all are ready, because the scoreboard is going to LIGHT UP between these two high scoring teams. 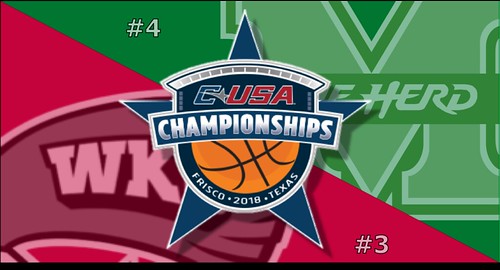 Can't even get on ESPN? The American East is on ESPN…
E-Mail: rickthendersonjr@gmail.com

Jon Elmore hit six 3-pointers in the second half, including three in a row as part of a personal 11-0 run, leading Marshall to a 67-66 win in the final of the 2018 C-USA Mens Basketball Championship.

The fourth-seeded Thundering Herd (24-10) won their first C-USA title and will advance to the NCAA Championship for the first time since 1987.

Elmore was named the C-USA Championship Most Valuable Player. In three Thundering Herd wins, he averaged 22.7 points, 4.7 rebounds and 5.3 assists, while connecting on 14 3-pointers.

The seven 3-pointers made by Elmore are the most ever in a C-USA Championship final game. Old record was 6, set by Houstons Kelvin Lewis back in 2010.
E-Mail: rickthendersonjr@gmail.com

MTSU AND CUSA SCREWED OVER AS EXPECTED!