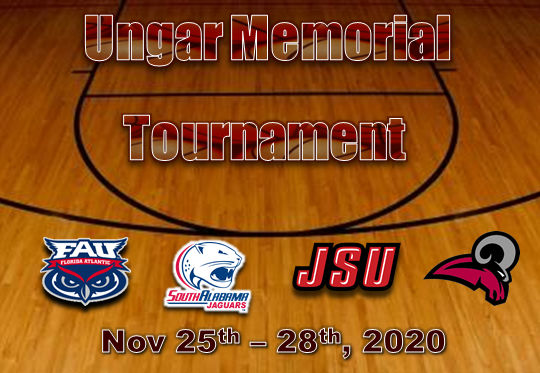 Where: The Mitchell Center

Coming off back-to-back winning seasons for the first time since 2007, the Owls will look to continue their upward trajectory under third-year head coachDusty May. FAU will open its season away from The Burrow for the fifth time in the last six seasons. The Owls will return more than 50 percent of their scoring and rebounding from last season and will be led by Jailyn Ingram, who paced the squad in both (12.0 ppg, 5.4 rpg) in 2019-20.

FAU will also return six student-athletes who started multiple contests last season. The Owls had advanced to the quarterfinals of the C-USA Championship tournament when the remainder of the season was canceled due to the Covid-19 pandemic. FAU is 4-11 all-time against South Alabama, and 7-5 versus Jacksonville State. They have never faced Mobile.

South Alabama was 20-11 last season and had earned a bye to the semifinals of the Sun Belt Conference Championship tournament when the season was halted. Since then, USA has lost 84.5 percent of its scoring production, notably Josh Ajayi, Trhae Mitchell, Andre Fox and Chad Lott. The bulk of scoring represents the third highest number in the NCAA this year with Rider and Radford as the only teams with a higher total.

Sophomores Tyreke Locure and KK Curry with senior John Pettway return from last year each with multiple double-digit scoring games from last season with an expected increase in scoring roles. The Jaguars have not faced the Owls since late in the 2012-13 season, when both were members of the Sun Belt Conference.

The Gamecocks will tip-off their season against SEC opponent Alabama Wednesday  before heading south to the Mitchell Center. JSU has 11 newcomers on its roster which is the is the largest incoming group of Gamecocks since the 2011-12 season.  JSU was picked to finish seventh in both the OVC Coaches/SID Poll and the OVC Media Poll.

Jacksonville State finished the 2019-20 season with its fourth consecutive trip to the OVC Tournament. It was one of just three programs in the league to reach the postseason tournament in each of its last four seasons (Murray State and Belmont). Head coach Ray Harper owns 80 wins in four seasons at JSU, ranking third in program history in D1 wins behind former head coach James Green (89, eight seasons). The Gamecocks last faced the Owls in 2003.


Mobile at a Glance

Unlike the rest of the tournament teams, the NAIA Rams are already five games into their season and sit at 4-1 coming into action. Most recently, they hosted and defeated Carver College by the score of 78-49 on Sunday, Nov. 22. The Rams got some good news with the return of  Junior Darvin Jones, who saw action for the first time in two years after serious injuries kept him off the court.

Jones, a senior now, played in 23 games during his freshman season of 2017-18 and averaged 8.4 points per game. He played in 14 games during his sophomore season before an injury ended his season. He had not seen the court since until Sunday's win over Carver College. Mobile will take on south Florida's Keiser University Wednesday before beginning tournament play in the Mitchell Center.

South Alabama will be a tough contest. Historically a strong program, the Jaguars are expected to finish second in the Sun Belt's East division this year, according to the SBC Coaches Preseason Poll.

Jacksonville State is a bit of a different story. The Gamecocks are tabbed to finish in the middle of the pack according to the Ohio Valley Conference Preseason Poll.

That said, the OVC is traditionally a stronger conference than the SBC. Although some would argue that is beginning to shift as the SBC's UALR and Georgia State solidify their foundations and the OVC's Murray State and Belmont try continue to navigate around losing a great deal of talent over the last couple of years. This includes the likes of current Memphis Grizzlies star Ja Morant (Murray State) and Cleveland Cavalier Dylan Windler (Belmont).

Taking two out of the three in Mobile should be the goal for FAU, but don't be surprised if the Owls are only able to bring just one win back to Boca.

If Dusty May's boys win all three contest, then start getting your flights to Indianapolis in order because the Owls are going to be crowned National Champions. on my twitter feed.

Interesting to not see Ingram in the season opening starting lineup.

It's FINALLY time for @FAUMBB! 🦉🏀 Owls vs. South Alabama Jaguars is tipping off in ESPN+ now.#FAU's first Starting Five of the season ⬇️

The Owls are in an uphill climb against a solid South Alabama squad.

Kenan Blackshear leads #FAU with six points, all of which coming from the three-point ball.#USA has the 22-16 advantage midway through the first half.

Owls have clawed back to within single digits before the Jags use a 4-0 run to take an 11-point advantage into halftime.

That being said, Jailyn Ingram joins a list of FAU greats like Carlos Monroe and Damon Arnette in scoring 1,000+ points and collecting 500+ rebounds.

Here comes that Owls defense we've gotten used to under Dusty May! And good defense transitions to sound offense!

In his first game from transferring from Minnesota, Greenlee has a game high 16-points. pic.twitter.com/CSwqblXGmW

If either Forrest, or Ingram shoot just 30% (instead of 2-17 combined) we're up BIG right now.
E-Mail: rickthendersonjr@gmail.com

.@KBUCKETS11 WITH NO REGARD FOR HUMAN LIFE!!!

Well that was not fun…

Lead by three points with 22 second left and then give up 5 points and lose.

THAT SUUUUUUUCKS. FAU falls after Bleackshear's free thrown rims out, WMU transfer Michael Flowers goes down the court and scores 20th point with a three-pointer just before the buzzer with a hand in his face.