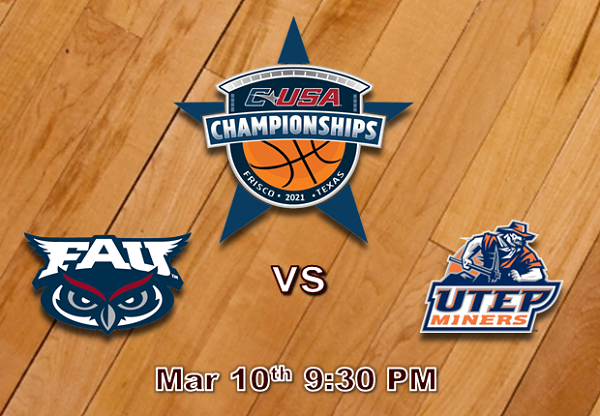 Where: Ford Center at The Star

Series: The Miners own a slight 5-4 edge over the Owls, although FAU won the last three meetings.

UTEP at a Glance:

UTEP enters the C-USA Tournament as the No.5 seed from the West division. The Miners have won four straight conference matchups, including series sweeps over Florida International and Charlotte.

Last time out, the Miners had the eyes of the college basketball world upon them as they took one of the game's blue-bloods to a close finish. After winning the majority of the game, the Kansas Jayhawks pulled away from the upset minded Miners for a 67-62 victory in Lawrence.

Souley Boum leads the Miners in scoring with 16.8 PPG, good for the third best in the conference. He, as well as teammate Bryson Williams were named All-C-USA Third Team for this season.


FAU at a Glance:

Just like UTEP, the Owls enter the C-USA Tournament on a four-game win streak agains conference opponents following sweeps over Southern Miss and Middle Tennessee. FAU automatically makes the second round of the tournament as the East division's No. 4 seed.

In their most recent game, guard Michael Forrest lead the team with 16 points en route to a 63-54 victory over MTSU. The win secured the third straight winning record the the FAU Men's Basketball program, a feet never accomplished since the team's transition to Division I.

Forward Jailyn Ingram continues to pace the Owls in PPG and RPG with 12.5 and 12.1, respectively. Forrest is the only other Owl averaging double digits in scoring with 12.1

The winner of this contest will play Louisiana Tech in the next round on the following day.

On a side note:

Rice closed the game on an 18-3 run.
E-Mail: rickthendersonjr@gmail.com

should be a good game....640 usually comes in ok, but if anyone has any issues.... use the Tunein app.... you can get local radio stations on there free....
"What counts is not necessarily the size of the dog in the fight - it's the size of the fight in the dog."
-Dwight D. Eisenhower

The first batch of today's games are drawing to a close.

Rice upsets Marshall, 72-68. The Owls from Houston will see UAB in the Quarterfinals.
When I'm not in school, I'm schooling the CUSA Twitter game; Follow Me Here

So far "The Owls" are doing well.

No JI again in the Starting Five, but expect him to enter the fray soon after tip.

It's GO TIME! @FAUMBB is all set for the Second Round of the #CUSA Tournament!#FAU's Starting 5⃣ vs. #UTEP ⬇️

Here goes Mike showing off again! Owls lead after a slow start to the night.

LOVING the energy from the boys today! The ball movement has been crisp as it's been all season.

An 18-8 UTEP run closes the half as the Miners capitalize off a several FAU unforced errors.

HALFTIME | #FAU 34 - #UTEP 33@2easyJ_ with a gorgeous move up top to create space for an open midrange jumper. That shot was needed as it brought an end to a long scoring drought for the Owls. @karlis_silins has a TH 9 PTS. JI isn't far behind with 8 PTS & a GH 4 Rebs. pic.twitter.com/CxJSrVtCRv