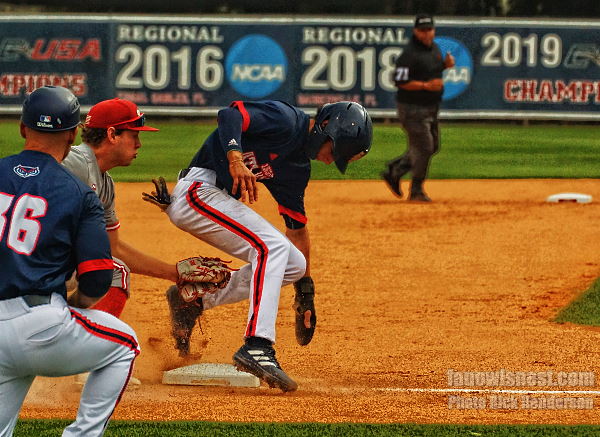 On a very blustery afternoon at FAU Baseball Stadium, the Owls, behind a solid effort by starting pitcher Tibur Rivero and an impressive offensive showing by Gabriel Rincones Jr, took the second game and the three-game series from the Sacred Heart Pioneers by a score of 10-2.

Over the course of their current six game win streak, FAU has outscored opponents 69-29 (+40 run differential).

Rivero, a right-handed sophomore currently in his first year with the baseball program, had his most effective outing to date. Bouncing back from a rough outing his last time out against Fordham, Rivero worked 5.1 innings allowing two runs on four hits and three walks while striking out six.

While his fastball command was spotty at times, Rivero showed good feel for a 12-6 curveball, spotting it well on the outer half of the plate and getting whiffs with it diving out of the strike zone.

He went to the curveball in all counts and relied on it to wiggle his way out of a few runners in scoring position on the basepaths in the 1st and 2nd.

Rivero committed his first and only major mistake of the game in the 4th inning when he served up a solo home run on a fastball left up. His control waned in the 6th, but he ended his night on a good note, striking out the last batter he faced. He threw 90 pitches.

Hes just gotta' get more consistent, head coach John McCormack said of Rivero. Theres too many deep counts. He was bailed out a little bit tonight by the fact that [Sacred Heart] had some guys hurt, they didnt have their full lineup in there. I thought he pitched really well in the 1st to work around the double, but he still needs to get more consistent.

The offense was at work early and often. FAU took an early lead in the first inning. After an infield error and a hit by pitch, Nolan Schanuel drove in Armando Albert (photo above) with an RBI single. FAU performed an encore performance in the 2nd inning. Following Albert reaching on an error and Gabriel Rincones Jr singling, Schanuel drove in his 18th run of the year with another base hit. Schanuel has 16 RBIs in his last eight games.

FAU kept the momentum up in the 3rd by posting a crooked number. Four straight Owls hits, including a leadoff double by Steven Loden, quickly made it a 4-0 game. With one out, FAU loaded the bases for the teams heaviest hitter, Rincones Jr. After working the count to 3-1, Rincones Jr. cleared the bases with a three-RBI double to right. The lefty struck again his next time up, doubling to center. For the lefty-hitting, righty-throwing 64 224 pound specimen, the doubles were his 13th and 14th extra base hits of the year. But Rincones Jr. wasnt done. In the 8th, he assured he reached base in each of his five plate appearances with an RBI base hit to right. The four-hit game was the first of his Division I career. 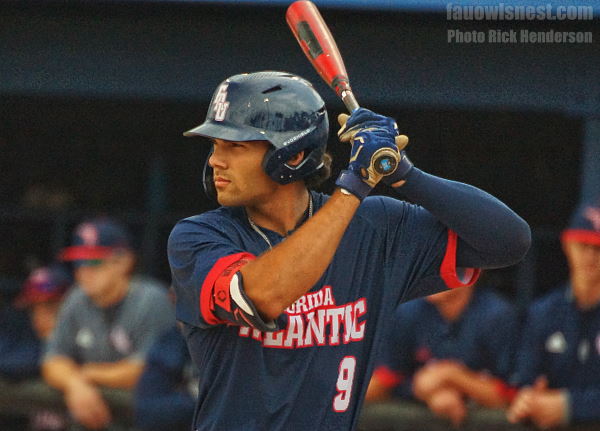 Rincones Jr. (photo above) has an interesting lineage that spans from his birthplace in Boynton Beach to Venezuela and Scotland before he attended baseball factory Plant High School in Tampa. Plant is known for producing many successful major league players such as Pete Alonso, Kyle Tucker and Wade Boggs. From there, Rincones Jr. spent two seasons in JUCO at St. Petersburg College. He forwent signing with the San Diego Padres who drafted him in the 19th round last season to come to FAU. According to McCormack, this season, Rincones Jr. has a lot of attention on him as well as some unique personal circumstances, but when he steps onto the clay and turf, he is able to quiet it all and just play ball.

Hes one of the most dynamic people weve had here in a long time. He is a fabulous teammate, hes an unbelievable human being, he cares about winning, McCormack said. Hes got a lot on his plate in terms of the draft, theres a lot of expectation circling him personally. He hasnt seen his family in four years. He is an amazing guy. Im happy hes here. I know its just for the year, but hes really, really good at what he does.

The Owls move to 12-4 on the season with the win. They will close out the series Sunday at noon with a chance to sweep their third straight.