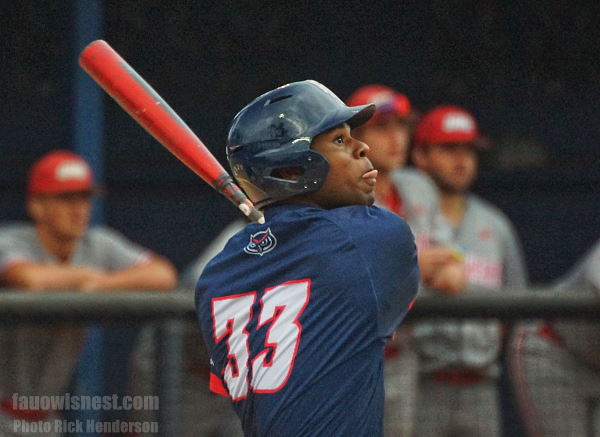 As it has all series long, the long ball once again made the difference on Sunday afternoon at FAU Baseball Stadium. Backed by a solid outing on the mound by righty Jacob Josey, homers by Dylan Goldstein, Nicholas Toney and Jackson Ross propelled the Owls to a 8-4 win. The victory allowed the Owls to put a bow on a series win over conference rival UTSA.

After a quick first inning, FAU jumped on UTSA righty Braden Davis. With one out, the mostly-lefty lineup strung together four straight hits. The big blast was the three-run home run off the bat of the sophomore Goldstein. In a 3-2 count, the first baseman no-doubted one over the right field fence, bringing a 3-23 stretch to an end. Goldstein later added an RBI double by stroking a centrally located pitch into the right center field gap. It marked his third multi-hit game this season.

In the 4th, with the Roadrunners leading by a run, Nicholas Toney (photo) slammed his two-run shot, giving the Owls the lead right back. For Toney – a senior, playing in just his ninth game of the year and first back off the injured list  it was his first homer of the year.

Congratulations to him. McCormack said. He comes back and gets a start, gets a couple hits and a home run. Im real proud of him. Hes been here a long time and he knows what its about. He didnt get overwhelmed by the situation and had a good day.

After showing solid contact in his first AB, Jackson Ross put FAU up by four in the 7th, depositing another two-run homer to right. The Ross home run marked a whopping nine hit in the three-game set against the Roadrunners.

I didnt realize it was that, but thats part of our offense, McCormack said laughing. We want to drive the baseball and where we play, balls have a tendency to go out. We recruit to it and you see how it can change a game, it can flip a game. In college baseball, its really hard to continue to get singles, but if you can get three runs with one swing, lets do it.

After three innings of mostly ineffective work by starter Tyler Burnham, the Owls turned to redshirt senior Jacob Josey. Despite allowing the inherited runner to score as well as allowing a run of his own in his first frame, Josey was lights out thereafter and pitched the rest of the game.

With the help of well-placed breaking stuff, a funky arm angle and a stop-and-start delivery that allows him to mess with timing, Josey ate three innings and set down nine in a row in the 5th, 6th and 7th. Josey ran into some trouble in the 8th, putting two on with no outs and bringing the tying run to the plate with two outs against an opposite side lefty hitter, but he rolled a 1-3 groundout to end the threat.

Despite his shaky fifth frame of work, Coach McCormack allowed Josey the opportunity to finish the game. Josey awarded his coach with another quiet 1-2-3 frame to close out the day and the series for the Owls.

He wasnt coming out. He looked at me and said, I can do this. McCormack said. I thought he did a really nice job, especially when we needed it. He calmed the whole thing down and let the offense do their thing.

A converted infielder who missed all of last season with an injury, Josey walked three and struck out three on 95 pitches. Via effective to-contact stuff from the left side, he has a 1.88 ERA in his last 19.1 innings pitched. Josey picked up the win, his second straight.

Last Sunday he went in and did the same thing, went in roughly at the same time and rolled out the game and did it again this Sunday, McCormack said of Josey who has relieved the same starter, Tyler Burnham in back-to-back outings. The one thing he does is compete and he can throw strikes with a couple different pitches. It was great to see.

1-4 away from the Stadium and 1-2 outside of the state of Florida, FAU hits the highway for their next four. The Owls make a quick stop in Orlando before heading to Houston, Texas for another in-conference series. Coach McCormack believes that his team played better than their record last road trip and is better equipped mentally for the upcoming one.

I think that this time, when we go, well be used to being in a hotel, well be used to being a visitor, we will be used to eating on the road. We didnt do that all year because of our early season schedule, McCormack said of the Owls who played their first 18 games in the Sunshine State. I think that going to Rice, I think weve done all that in terms of the plane flight and the airport and the mask wearing. Maybe this time itll be a little more comfortable for them and well be okay.