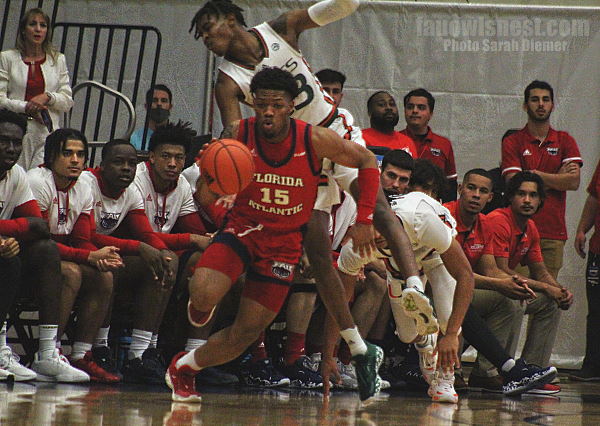 Florida Atlantic Men's Basketball had only beaten the Miami Hurricanes once in twenty-five tries heading into Tuesday night's matchup in The Burrow.

Would they pull off another upset?

They certainly had their chance down the stretch, but ultimately fell victim as Miami (2-1) used a last second lay-up to steal a 68-66 win before a raucous crowd.

The Hurricanes took an early lead as FAU turned the ball over 11 times, and would hold onto it to find themselves in command 34-20 at intermission.

"It could be nerves, it could just be this environment, we're just not used to playing with this much passion and energy in the building", said Head Coach Dusty May. "We have to do a better job of taking care of the basketball.

However, FAU (1-2) would get control of the miscues in the second half and make a game of things and pull to within two points at the 1:57 mark of the second half behind a three point basket by Michael Forrest which nearly erased a 16 point Hurricane lead just over seven minutes earlier in the period.

"There was eight minutes left and we felt like we were still playing poorly. I do think that our guys' character, and their positivity, they felt like we had another run in us. We made the last eight minutes very very interesting", May said.

Forrest would answer again for the Owls with another critical three point basket later to the pleasure of those in attendance and tie the game with just :16 remaining.

Needing a stop, FAU would not get one, as Miami Coach Jim Larrañaga went to a reliable choice in guard Isaiah Wong for the game's final basket and eventual winner with 0.7 seconds on the clock.

"Hat's off to Wong, he went and got a basket in crucial situation", said May. "I thought our gaps were good, he just made a great play…to win the game."

FAU matched the visitors 36-36 in total rebounds, and on the offensive (9) and defensive ends respectively (27).

Hurting the Owls all game was a troublesome final 10-of-24 showing at the free-throw line compared to that of 30-of-38 for the Canes.

Had that not been the case, things might have ended differently.

"We're a work in progress, but we have a chance to be a very good basketball team", May said.

Vlad Goldin posted a game high 11 rebounds for FAU in the loss, despite seeing only 19 minutes of action and fouling out. Forrest netted a game high 21 points from the floor on on 7-of-16 shooting, including 4-of-9 from downtown. Fellow guard Alijah Martin (photo) added 17 points and was second on the team with six rebounds.

The Owls will have a couple days to get ready for back-to-back games against UT Martin on Friday and North Dakota on Saturday. Both contests will tip at 6:00 PM from FAU Arena.