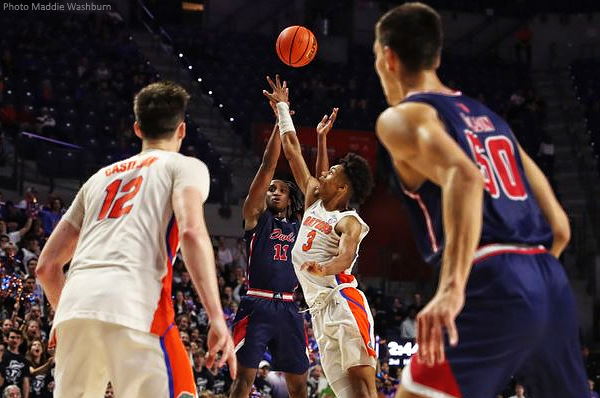 FAU men's basketball team earned a historic win on Monday night. The Owls went into Gainesville and knocked off the Florida Gators by a 76-74 final score in a thrilling contest.

"We've been through some growing pains and have lost a few close games like this against Power Five teams in the past that we probably played well enough to win but didn't get it done", said Florida Atlantic Head Coach Dusty May. "Hopefully this is a sign of things to come, as far as us making big free throws, not turning the ball over and playing well down the stretch."

Forrest made his first appearance of the season with today's game and made an immediate impact. The senior guard scored 20 points coming off of the bench and went 4-of-7 from 3-point range. Forrest caught fire as soon as he stepped on the floor, going 3-for-3 quickly from long range in the first half.

"They hit 13 3s. That's really all it is. If we would have held them to 10 we probably win the game," Gator Head Coach Todd Golden said. "It'll probably be the most anyone makes against us this year."

A dunk from Vladislav Goldin, followed by buckets from Martin and Johnell Davis put FAU up 71-59, but the Gators made it a nail-biter in the final five minutes. With the Gators on the Owls' heels and only down four, Martin hit what looked like a dagger 3-pointer to put FAU ahead 74-67.

The Owls were assessed a technical foul for calling a timeout with none remaining, and Florida pulled to within 74-71 with the free throws at 50 seconds left. Forrest was fouled with 38 seconds left and hit a pair of clutch free throws, but then the Gators hit a 3-pointer to pull within 76-74 with 13 seconds to go.

On the next inbounds pass, the Owls eluded the Gators' foul attempts, dwindling the clock to only 0.1 seconds left. The free throw was missed, and the buzzer sounded, sealing the historic win for the Owls.

The game marked the first time back in Gainesville for FAU head coach Dusty May since his time with the Gators. May was on the Florida sidelines for three years as an assistant coach before taking over the Owls' program.

The Owls have put up a school-record four straight winning seasons with May, but tonight's game marks a signature win for both May and the program, putting an exclamation mark on a seven-day road trip for FAU.

"Our players have a great camaraderie and a great work ethic, and their character is what allowed us to get a lead, then go down, then battle back in an extremely tough environment on the road against very good players and a well-coached team", said May. "This win shows that we can weather some storms and stay composed."


The Owls will return from their seven-day road trip for the Boca Raton MegaBowl on Thursday against Bryant at 7:00 PM. The MegaBowl is part of the Paradise Invitational, a home three-team event featuring FAU, Bryant and Detroit Mercy.

Fans are encouraged to get to FAU Arena early on the 17th, as there will be a Semi-Pro themed poster giveaway for the first 200 people in attendance. There is also a photo opportunity with the famous eight-foot MegaBowl trophy.