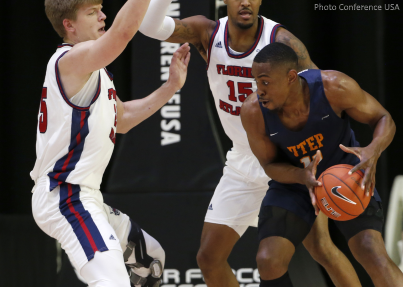 Florida Atlantic (13-9) held the Miners without a field goal for 6:35 until a slam dunk at the buzzer provided the games final points.  That defensive effort allowed the Owls to erase a two-point deficit (58-56) and go on a 20-10 run before the final dunk.

Karlis Silins (photo left) led the Owls offensively, setting a new career high with 22 points.  He hit 7-of-12 from the floor and was 7-of-9 from the line, while adding six rebounds.

Jailyn Ingram (phoot center) came off the bench to provide a spark for FAU, scoring eight points and pulling down eight rebounds.  With those boards, he now ranks No. 3 all-time in career rebounds in program history.

Bryan Greenlee scored 13 points and dished out four assists for the Owls, while Michael Forrest added 11 points and six rebounds.

Souley Boum scored a game-high 23 points for UTEP (12-12).  Keonte Kennedy and Bryson Williams each scored 14 points and grabbed seven rebounds for the Miners.

The Owls got a boost at the free throw line, were they were 77% for the night.

We stepped up and made our free throws," FAU Head Coach Dusty May said. "Throughout the season we struggled shooting from the line at times, so very pleased with our guys making big shots down the stretch."

Florida Atlantic advances to play Louisiana Tech at 9:30 PM on Thursday in quarterfinal action.  The two teams did not meet in the regular season.