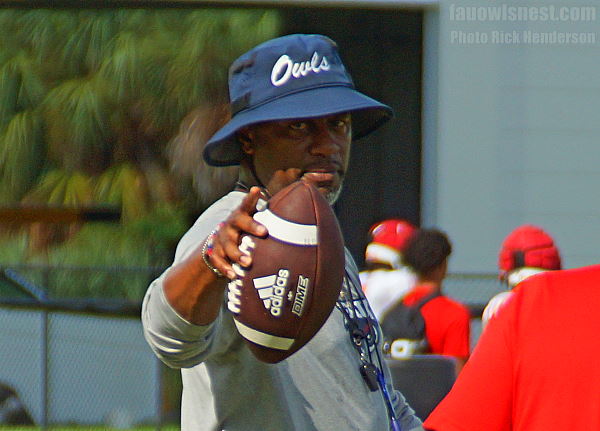 Fresh off his team's dominating performance to open both the season and the league slate for the 2022, Coach Taggart met with the media to wrap up the 49er win and look ahead to a tile with the Ohio Bobcats.

Here are some highlights of what he had to offer during the session including playing on the road, an early look at the Bobcats, the Owl kicking game and more.


On playing on the road for week one

"I think they have a lot of experience back. On defense there are a lot of guys who started a lot of games. They have a new defensive coordinator so our offense is kind of the same as it was last week where we don't know what we are going to get. Offensively I think we'll see a lot of the stuff they did last year. I do think with them all being back and having the experience will help. But we can't go off of last year we are going to have to prepare to play for the team we are going to face this year."

On the performance of kicker Morgan Suarez

"With Morgan you talk about our kicking position being a concern to being a weapon for us, just like that. It was good to see Morgan step up, we all believed and knew what he was capable of doing. One thing I love about the kid is that he never gets rattled, he's a mentally tough individual and you have to be being a kicker. As much as I try to make it a competition, he was hungry…very competitive. The way he executed on Saturday, that was big for him but bigger for our entire football team."

On mistakes taken away from the Charlotte game

"We left a lot of points on the field. We threw the ball down the field quite a bit and didn't execute on them as much as we would like to have. I think you saw that we have some guys that can run and take the top off of the defense so we want to be able to execute on those plays more often than what we did this past week."

"On the run game I think there are some things that we could have done better…and we will work on that part as well. A lot of fundamental and technical things that we can do better just like any other first ball games. Minimize missed assignments."

"With Johnny it was more a personal reason why he didn't play, hopefully we will get Johnny back this week. With Chris (Jones) and Decarius (Hawthorne) they both had injuries that they were recovering from and I expect for them to play this week. Jamie was another one, personal…not sure (about this week)…day-to-day."

On the display of the depth of the running back room

"It was really good to see our guys go and pay the way they did knowing that we had some guys out of the game. When you have depth, you can do those things and make everyone better. It's important to have that depth because the injuries are going to happen. You are going to need them for the entire season. And even if they don't happen you need depth to stay fresh."

FAU will next take on Ohio Saturday at 6:00 PM local time. The game will be televised on ESPN+.