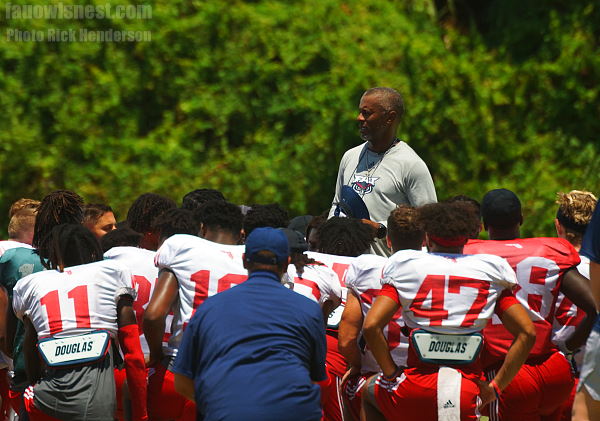 Coming of a down to the wire road loss to Ohio this past weekend, the Owls will look forward to playing in front of the home crowd once again for this first of two contests at Schnellenberger Field.

On Monday afternoon, Coach Taggart met with the media to wrap up the Bobcat loss while looking ahead to FCS Top 25 mainstay Southeatern Louisiana.

Here are some highlights of what he had to offer during the session including a detailed injury update, an early look at the Lions, and more.

On the defensive line injuries

"Decarius (Hawthorne) had a cast on his hand, he had a broken hand last week, and the same thing with Xavier Peters, who wasn't able to practice much this week because of his broken hand. So those two guys have broken hands. Jaylen Joyner actually got injured in pre-game, so that's why you didn't see much of him in the game. We'll see how the week goes. If they are ready to go we are going to play them. Evan (Anderson) won't play this week, we hope to get him back as soon as possible."

On the return of Johnny Ford

Mood of the team meeting after the Ohio loss

"Each week I give our guys the key to victory. One is play with fanatical effort. I thought our guys did that three quarters. Two is play smart, and we didn't do a good job that we had too many costly penalties at really bad times in that ball game. But it's disappointing because we know we can't do those things. Turnovers, we had two of them on the road. That's critical. Those three things…the boxes, we didn't check. They cost us big. But, I told them I really liked the way they came back, and that's something I haven't seen since I've been here, that fight like that."

On the performance of the banged up defensive line

"Some guys didn't think they were going to start and play as much, and seeing those guys do some of the things they did…it wasn't always perfect, but those guys did some good things. I was impressed with Merrifield. But overall defensively, we've got to be better fundamentally."

"It's good for us to finally get an opponent that we can scout for what they do this year. That's going to be different for us going into this game. last year they threw the ball around quite a bit. This year they have a different style quarterback that can run a little bit. They used him last year in some (wild) cat packages. You watch him against Louisiana Lafayette and it's a different style of play, he's a big kid. Good football program, they are one of the top FCS schools out there and have some skill guys that can run and we've got to come play ball. We've got to be better at what we do."

On the muffed punt return's impact on the game

"We should have caught the ball, we let the ball bounce then try it. When you let it bounce you don't know which direction it is going to go. We made one decision that made everything else worse. We compounded that bad decision by not catching the ball. We had the momentum offensively…and once that happened it changed the momentum and got then going."