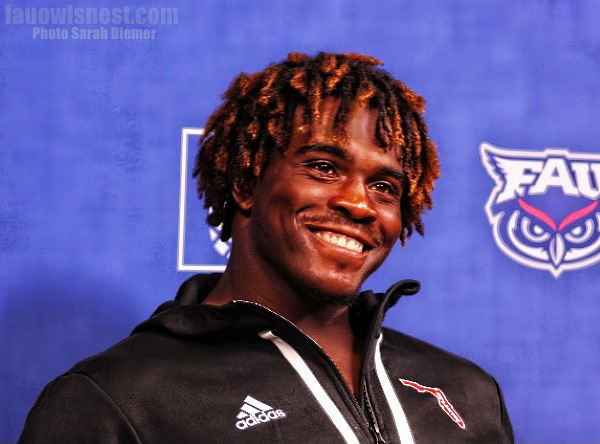 He didn't let the lost time deter him, stressing the importance of staying strong mentally.

"The first thing I had to work on was my mentality," Leroy said. "I didn't want my mentality to become weak because when your mind becomes weak, your body becomes weak. Your body does what your mind tells you to, I needed to make sure my muscle [in my brain] is stronger than any muscle in my body. As I started to train my brain, that's when I started to train my body, I had my father who I trained with, I had a couple of coaches back home who I trained with, so I had to have physical endurance for the game, as well as mental endurance."

When Leroy got back to the team in the Fall, there were some adjustments that needed to be made to new defensive coordinator Mike Stoops' offense.

"At first, it was kind of a struggle with the new scheme and being able to return in the fall [instead of] the spring," Leroy said. "It was mostly just being able to lift in the spring without being able to get the concepts down with our defense, so now everything is flowing a bit smoother and it's getting a lot better."

Leroy attributes Stoops to helping him adjust to that new system so easily.

"Coach Stoops does a good job of explaining, as well as Coach [Lance] Thompson, my position coach," Leroy said. "When I don't understand something, they break it down pretty well and it helps me get the thing that I get frustrated on and they let me know not to get too frustrated, [they'd remind me] you're fresh back into the scheme. Guys have been learning this since January, you came in July, you're learning, you're getting the concept pretty well so just keep going with the steps that you're taking, just keep progressing."

Working with Leroy for the first time this season, Stoops saw a lot of growth from him over the course of the season.

"I think he's matured a lot, probably over the last year. So I see him, you know, I see some growth in that part of his game," Stoops said. "I think he's become more consistent. You know the day in day out basis. So, you know those were things I see with him, the more consistency in his game. In that, you know that's what you want from a player there are not these highs and lows, you just come and play in and know what you're doing, know your job and I think he's done a really good job of that."

FAU Head Coach Willie Taggart, who came in during the 2020 season he missed, was amazed by what he saw from Leroy after returning to the team.

"He's getting back into football shape," he said with optimism in his voice. "You think about it, he had a whole year away from it, he didn't have spring ball and came back into training camp, so it was going to take a minute to not only learn the defense but to get yourself back into football playing shape. I think we're starting to see now that things are starting to come back to him and look easier to him than it was the first part of the season."

When the Owls opened the season, it was like he never even left. He played a huge role in keeping the Owls in the game against then-No.13 Florida, notching six total tackles and an assisted tackle for a loss in their 35-14 loss to the Gators.

"My first game back, it was almost like a dream come true," Leroy said. "Being able to be around my teammates and being in the atmosphere that makes me most comfortable: playing ball."

The next week, he was ready to get back to work in front of the home fans at FAU Stadium.

"I'm actually getting chills as you ask that question," Leroy said. "My first time feeling something as far as playing in our stadium was a scrimmage we had a few weeks before the season opener. I just remember standing outside the back gate by our locker room just staring out at the stadium remembering how good it felt to hear the crowd roar. I can't wait to experience that again and I can't wait for Saturday."

That week against Georgia Southern, Leroy indeed made the crowd roar. With the Eagles at FAU's 9-yard line and ready to put themselves up by two scores, Leroy got to GSU quarterback Sam Kennerson in the backfield, knocking the ball loose for safety Jordan Helm to recover. The fumble ended up being the turning point of the game, as that was the closest Georgia Southern got to putting up a score for the rest of the 38-6 FAU victory.

"I feel like it was perfect timing," Leroy said when asked about the fumble. "Our coaches talked about getting the ball out this week and I felt like it was an emphasis point this week. I just felt my hand snatch his arm down and I was like 'that was it.' It was perfect timing because they were getting ready to punch it in. One play can shift momentum like that and it's amazing."

Coach Taggart mentioned that he told the team he wanted them to strive for three takeaways each game, and when he saw the ball on the ground, there was no better feeling.

"I talked to Keke this week and I said 'you know what, this would be a perfect time, being at home, to get the crowd what they want from Keke,'" he said. "It's good to see him making plays for us."

And making plays was what Leroy kept doing. After putting up just three assisted tackles against Fordham, he would have no less than seven tackles in the next three games, including a team-leading eight in FAU's Shula Bowl victory over FIU.

"I waited for a year for this game," Leroy said of beating the Owls' biggest rival. "The intensity I came into this game with, the passion I step on the field with, where I had the chance to, I had to spread the energy where I could and make sure everyone's on the same page. The guys have that energy themselves, but being that light for everyone else when they need it, I felt like that was one of my roles this week."

Keke has that type of role every week, carrying his smile wherever he goes, and Coach Taggart is in agreement.

"I think it's great to have a guy on the team that the guys love," Taggart said. "I think all of his teammates love him, they were so excited for him being back on the team."

Coach Taggart joked about Leroy smiling and being nice too much, saying "Keke has been nice, but I don't want him to be nice all the time, I want him to still have that nasty side of him on the football field and to not take it easy on anybody."

But he hasn't been taking it easy on anybody. His 36 total tackles on the season rank third on the team, just behind Caliph Brice (43) and Jordan Helm (42.) His three tackles for a loss are also third on the team behind Evan Anderson and Jaylen Joyner.

"It's good to see him growing up and back out there and happy playing the game that he loves," Taggart said. "More importantly, he's taking advantage of an opportunity presented to him."

However, Leroy isn't satisfied with those seven-tackle games he's been having recently - he wants more and more from himself every day.

"Well, you know I always see that there's room for improvement and I'll probably never be satisfied with my game still, even if I have like a maybe a 10 or 11 tackle game,  I still want more for myself and one for the team because I want them to know that as much as I put in I want to know I work for it every day for it not just something that I get on Saturdays or something that just comes to me, it's all in the preparation process, you know just get 1% better every day."

Now, heading into Thursday's game against Charlotte, he's starting to feel like his 2019 self again.

"I feel it, like yesterday was one of my best practices," Leroy said when asked if he's back to his normal self. "It was a motivation for me, it was like a confidence booster and it felt great because now instead of scrambling trying to figure out what I do next, now I'm breaking everything down in my head, like the plays are starting to slow down more. So I'm starting to see everything that I need to do before it happens almost and now I can get to a point why communicate more, I know that's a big point where guys are like, Hey bro, you don't talk as much and I'm like, bro, communication comes with confidence. So, the more confident I am with the players on our skin, the more that I'll be able to be a more vocal leader, and in the way I was 2019."

Now, heading into the second half of the season, Keke Leroy will have the chance to put his normal self on full display, and the Owls need it. They're 1-1 in C-USA play and now face off against a 4-2 Charlotte team that is first in the C-USA East Divison.