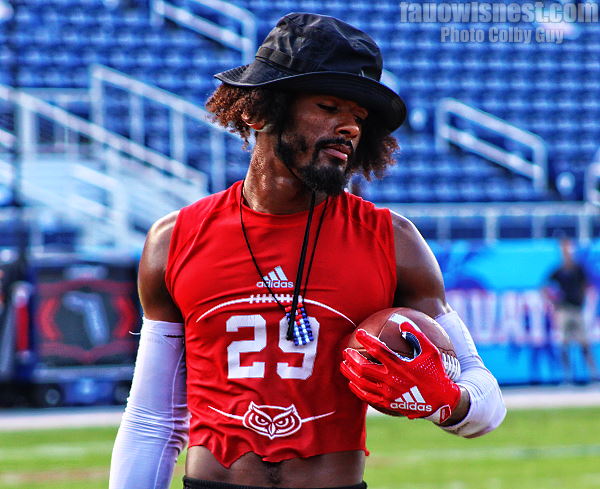 Its Coach Korel, head coach Willie Taggart said after FAUs 45-14 win over Fordham last week. Thats what he wants and the defense will give it to him."


During practice that week, redshirt senior cornerback Korel Smith [photo] sat in that same chair and wanted one thing: for the Owls defense to get to the ball and stop the run.

"I would like for us to swarm the ball more, like a sea of red," Smith said, remembering that phrase from a coach at FAU from one of his prior years with the school. "I'd like for us to get back to that and get all 11 attacking the ball, tagging off on the running back or whoever has the ball."

Smith's words came true in that Sept. 18 game against Fordham, with the Owls holding the Rams to just 29 yards of rushing. It wasn't a coincidence either. Smith is one of the biggest vocal leaders on Florida Atlantic's roster, acting as an 'on-field coach' as many members of the coaching staff like to call him.

"He's like another coach on the field," Taggart said during a press conference a few weeks prior. "I'd be standing next to him on the sideline and he would yell over to one of his teammates about a certain coverage he's supposed to check to right before the play and he's screaming at him 'you gotta check it! you gotta check it!' It was pretty cool to hear while your player is on the sideline. He's into it and he's trying to help his teammates out."

He's been with FAU since 2016, being on the Owls through three different head coaches and seven different defensive coordinators over the six seasons he spent in Boca and he soaked up information from every single one of them.

"He has an amazing impact," senior cornerback Zyon Gilbert said. "He's been here for six years, he had different coaches and he takes everything he learned and reiterates it back to our players."

Winning has been something that has been on Smith's radar from the moment he arrived in Boca. After redshirting in 2016, he was a part of Lane Kiffin's turnaround of the program in 2017, which saw the Owls win their first C-USA title. While not starting, he was a steady contributor, notching 14 solo tackles and 19 total tackles in his first collegiate season of play. However, it took him years to win over that starting role.

After coming off of the bench for three more seasons, Smith finally saw his name on the top of the depth chart to start the 2021 season when the Owls opened up the year against Florida. He got the opportunity after redshirt junior safety Ahman Ross, who usually started in that STAR position Smith was slotted in, missed a few days of practice that week - and the coaching staff did not regret their decision to put him in.

He was arguably one of FAU's most dominant defensive players, having the best game of his career in front of a hostile Florida crowd of 90,000. Notching nine tackles and a pass deflection, Smith solidified his place in the starting lineup, returning to start that week against Georgia Southern.

He followed up that stellar week one performance with another solid contribution against the Eagles, putting up a sack, four tackles, and a crucial third-quarter interception that helped put the game out of reach.

"I'm very impressed with Korel, and it's not unexpected," Taggart said following that week's game. "That's who he is, he's such a smart football player."

While he only notched two tackles in last week's game against Fordham, his leadership and knowledge of the game were apparent. He is a consistent leader in practice, on the field, and in the locker room, and his mindset going into the game was shared by his teammates.

"He's a very emotional guy and he plays with a lot of emotion." defensive coordinator Mike Stoops said. "He's one of our leaders on defense, so it's important to him. He likes to play at a high level and he expects everyone else on the team to play to that level and prepare at that level."

He's been having one of the best seasons of his career, already tying his career-high in interceptions with the pick against Georgia Southern and now just 10 tackles away from breaking his career-best of 25, and Coach Taggart believes that he can keep up that level of play.

"We expect that to continue to happen with him," Taggart said. "Because of his knowledge and understanding of the game, he's always going to be around the ball and make plays and he loves playing."

Smith will have the opportunity to keep making plays in the game he loves Saturday when the Owls face Air Force in their second road game of the young season. Kickoff is slated for 8:00 PM EST and the game will air on the FS2 network.

This won't be the last one of these for sure, I'm looking forward to it because these are so fun to write.