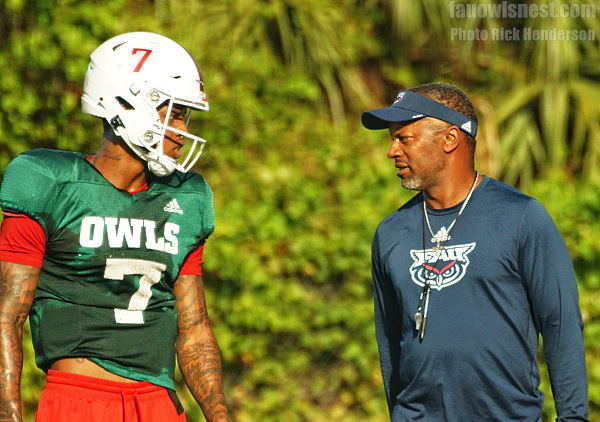 With six games under their belts in the 2022 slate, the Owls are looking at a tough climb based on the remaining schedule. On Monday Coach Taggart met with the media to post mortem some of what went wrong for FAU against North Texas and talk about potential changes to their approach for the back half of the season.

On adjustments to the defensive strategy moving forward

"It comes down to being in your gaps and owning your gaps. Guys can't jump out of their gaps…I think simplifying some things are going to allow our guys to be able to do that better…I think that will make a big improvement for our defense. We have a lot of talent, we should be a lot better than what we have been and not giving up runs like we've been doing. Just go back to the fundamentals and the base and try to simply some things. We have fast guys, but we're not playing fast. That comes down to thinking to much, and not playing instinctively. And if you're not playing instinctively on the defensive side of the ball, you're dead. "

"We've just go to be better on third down. If you ask me, that's the killer. We'll get a 3rd and 12 and give that up. These type of things can't happen. Being better there will help our football team."

"I think it's a wake up call in all of these games we have lost. We lost them all pretty much the same way.  That is where it's frustrating. Our guys show that we can play, we're just not consistently executing plays. We have these lulls in games where…it's frustrating. If you look at all of the games we pretty much help people beat us. And you can't win that way. As coaches we've got to be the difference makers for our players right now. They're not far away."

"I think he threw a couple dimes in there…early in the game. You throw a pass like that and they drop them, that takes a lot away from a quarterback. We had three possible touchdowns. But one thing that would help is we've got to run the football. Consistently run the football and not ask him to throw the ball 50 times a game. Or not even ask him to throw the ball 30 times a game. We have some really good running backs, and a good offensive line. I think you help your quarterback by running the ball…and play action. He's good at doing those kind of things. I think he tries to do more than he needs to do, and we get ourselves behind and he's pressing more. We probably throw the ball down the field too much."

On strategy improvement plans for the bye week

"All day yesterday we were in there (meeting room) going over that. I just came from one all morning today going over those things to get better. That's going to be a big part of this bye week is 'how can we put our players on the best position to win'. Play fast, not think a lot, and just go play football like we all believe they can. I think that comes with reps, reps, reps, reps, reps, and accountability. I think there are some things we can do this bye week that will help us and our issues. We'll spend time on Rice, but a big part of this is us working on us."