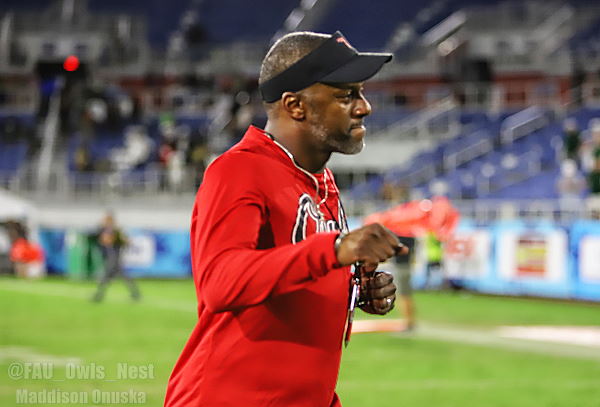 Fresh off an exciting upset victory over UAB, the Owls are now relatively in control of their bowl eligibility destiny once again.

But for now they will enjoy another well timed bye week to get rested and healed for an important road contest against FIU for the final Shula Bowl of the Conference USA era.

On Monday, Coach Willie Taggart met with the media to discuss the teams win over the weekend.

Below are some highlights of what he shared.

"You see an individual that loves playing football. You give him a chance to go out and get a ball and compete against someone, he's going to be excited about doing it and he's consistent with it every single day…he has that juice, he has that smile on. Like I told you guys Saturday, he plays the game he is supposed to defensively. When you meet him you wouldn't think he is that way…he's such a nice young man, always joking and having fun, but when it comes to playing the game he's a really good football player."


On the passing game against UAB

"I thought we were efficient in what we were doing, and thought our guys did a better job of executing when we did move the football. I thought N'Kosi managed the game really well and threw the ball well. UAB's defense is designed to not let you get behind them, and not let you be able to throw for so many yards on them. We knew coming in that was going to be a challenge for us but we did think that we had some opportunity to throw some balls down the field, and it was good to take advantage of that."


On what the win will do for confidence down the stretch

"It's huge, that's a big win against a good football team coming in here and playing. We've got to build off of it, the confidence and momentum. Understand what it took for us to win that ball game and continue to play that way. We played winning football. We really haven't seen this football team at it's best and we're making progress towards that way."


On the importance of punter Riley Thompson's performance

"Going in our game plan was to make UAB have the long field every time they got a possession. In order for that to happen we needed to get some first downs, and more importantly we needed our punter to flip the field for us. Not only did he flip the field, he totally flipped it to the one yard line in back-to-back punts which was huge for us. Their average starting position was the 19 yard line. Riley played a huge part in that, and did a great job kicking for us."


Getting ready for the rivalry game against FIU

"We understand the importance of this game. This game you can take the records out. It's big. FIU is playing a lot better than what they had earlier in the year. Feel like we're playing better than we did earlier in the year. So you have two teams playing better. Conference game, rivalry game, it doesn't get any bigger than that. We're going to work our tails off this week to prepare for them and do the same thing next week."


And the game balls go to


Johnny Ford's success against UAB and the wide open play

"Johnny has a lot of talent. We try and find ways to get him the ball. Johnny is a good runner too, but he's a mismatch for a lot of people, so we try to find those to allow us to be successful. I think a lot of those guys were worried about LaJohntay (Wester) and they forgot to cover Johnny. So, I guess LaJohntay helped him on that one."

"He's a different kind of running back, we've got to play to our strength and attack their weaknesses and he's an individual that allows us to do that. We've got to continue to do that whether it's running the ball or throwing the ball to him."