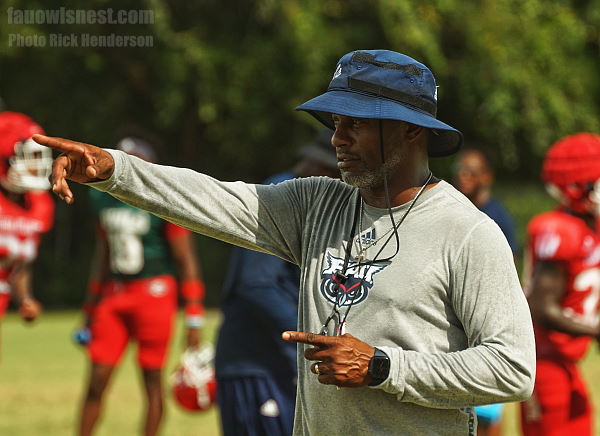 After a week off to rest a bit, watch film, practice, and heal some nagging injuries, the Owls are set to return to road play.

First up will be the final Shula Bowl of the Conference USA era.

On Monday, Coach Willie Taggart met with the media to continue discussions on the upcoming Panthers and the team's preparations.


The persona of the Shula Bowl

"That's the one game you circle on the calendar, that you know everybody is going to pay attention to, and everybody wants from your fan base to your school, and your team. You know how big the game is for you and your program. Sometimes you can be distracted because of all the hoopla that comes with it, or because of some guys knowing guys on the other team and you get distractions from all of the trash talking. You've got to stay locked into the plan and what it's going to take to win it."

"Going good. The guys had a couple days off and practiced on Sunday and looking forward to having a great practice tomorrow. We've got everybody that played in the UAB game healthy. Marquis Robinson is probable, Dorian Hinton is probable, they both practiced Sunday. Romain Mungin yes, and Jalen Joyner is probable he was out at practice yesterday. We have all of our guys back in the secondary, so we're in good shape."

On what he's seen from FIU

"You see a football team that has gotten better as the year has gone on. They are young football team. I thin last week was an anomaly, but I think the two games before that they were really playing well as a team. They are comfortable in what they are going and they have talent. They are starting to come together and understand the things that Coach MacIntyre wants them to do."

On the Panther passing attack

"They're going up tempo. Whenever you play a temp with tempo that can become a problem because you've got to be able to line up and…you've got to defend 11 guys instead of 10 guys when the (quarterback) can run as well. He's (Grayson James) done a good job of running the ball when he has to and he's does a good job with the RPO's getting the ball out. You've got to stay locked in and be disciplined. But they don't go fast all the time, most teams don't. So, you've got to do a great job of watching game film and understanding when, and why, and what plays are they running when they do go fast."


On the FIU defensive front

"They are multiple front. They play some odd front and stem some even front. They have some athletes on that side of the ball that can really get after the quarterback and are athletic enough to get off blocks. They will get you up front if you aren't locked in offensively."

On the weekend's recruiting activities

"Recruiting is recruiting, you've got to keep doing it. Evaluated some really good football players out there, so hopefully we can continue to bring some of them in. We feel good about it."

The progress of the Owls' pass rush

"I think we're better than what we were. A lot of it depends on who you are playing against and what type of quarterback you are playing against as well. For us, we have been playing some athletic quarterbacks so being careful and not allowing the quarterback to get 15-20 yards on you. Guys that are a little bit more pocket style, you put a little bit more pressure on them and make them move their feet. But for the most part when we have all of our guys in there, when we are full bore on defense, I thought our pass rush is a lot better than earlier in the season when we didn't have everybody."