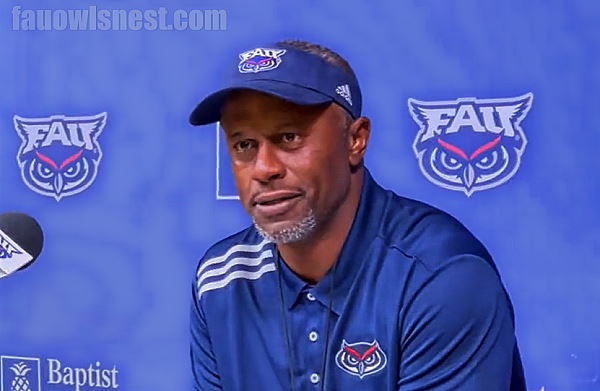 The Owls are sitting at 5-5 on th season with two games left. First up will be a trip to Murfreesboro, TN to take on the Blue Raiders who are also at 5-5 for the year.

On Monday, Coach Willie Taggart met with the media to wrap up the Shula Bowl win and discuss preparations for MTSU.


Is the Shula Bowl hangover gone?

"We've pretty much moved on, we have one heck of a challenge ahead of us this weekend and we have our focus on that, but it was a great win."

"We were in a team meeting yesterday, and Nick Weber has won six Shula Bowls. Guys were in there calling it the 'Weber Bowl'".

On the defense's  performance in the Shula Bowl

"What I saw in that game was a secondary that was prepared. I thought the defensive coaches did a good job of teaching our guys what to do. I thought our scout team did a great job emulating what FIU did and that helped out tremendously. I think ever since Evan Anderson has been back we've been more complete as a defense."

On Teja Young at nickel

"Teja is such a smart player. He can play linebacker for us, we could move him down to defensive end, and he's going to be successful. He understands offenses, and what they are trying to do and that helps him tremendously on the defensive side of ball. Moving him to nickel was one of the biggest changes we made because we're getting one of our smartest and best football players around the ball. He's closer to everyone and can let a lot of guys know what is going on."

Importance of Saturday's game against the Blue Raiders

"We understand what this game means and where it can get us - going to a bowl game, and closer to possibly playing in the conference championship as well. We're trying to focus on the process, and not the end result. What it's going to take to get there. That's always going to be the focus."

"It's game that we need to won. A lot of guys on this team that were a part of that loss last year, and know what it felt like in the locker room last year. That's been a motivator for our team to get right after that game in a lot of phases. We know how we felt, and we don't want to feel that way again."

"They are a tough football team. They play hard and are always competitive. You just look at the history of FAU and Middle, it seems like they have always had our number."

"They are a team that has been bitten by the injury bug. They have some guys out last week and found a way to win. That's always impressive. Coach Stock has been there a while. You see the kind of kids. They are blue collar, competitive, hard working, and a physical group. Defensively they are leading the conference in takeaways. And that is one of the keys for us, to take care of the football."

On playing in the cold weather

"We're just practicing baby. We're going to go up there an play in the weather they are playing in as well. Our goal is to focus on the keys to victory, and one thing about those keys to victory is it doesn't say anything about weather. So, we're not going to worry about weather. We're going to worry about preparation and execution on Saturday. It'll be chillier than down here, we know that - that's the facts."

Let's have a week of no negativity here.  I think the programs deserve it.

Again, been around awhile…graduated long ago.  I really really hate MTSU.  They have been a thorn in our side for 20 years.

Want a new coach, great.  FAU is the worst ever, great.  "I wont go to games until xxxxx happens", great.

But please save it this week.  This week is all positive vibes and please WT, get the boys ready and go beat this arrogant coach and terrible program.

posted Nov 15th 2022, 2:09 PM
I agree. The team and coaches have earned the right not to be trashed until they lose again. MTSU in all likelihood will be starting their backup qb and are short at WR if were ever going to win a road game this would be it