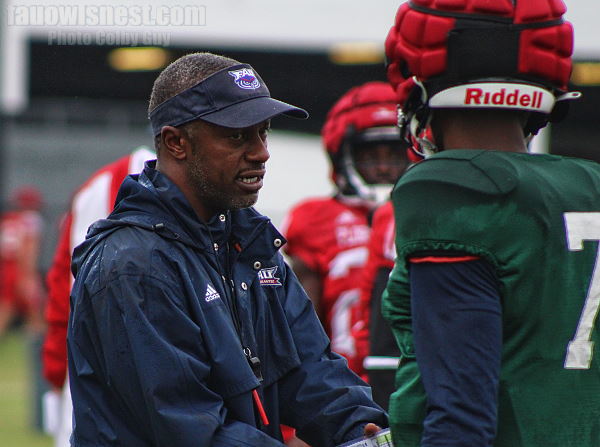 Already at the midpoint of the 2022 schedule the Owls are set to head back into Conference USA play with a showdown against North Texas. On Monday afternoon, Coach Taggart met with the media to wrap up a slim loss to Purdue and and look ahead to the Mean Green.

Injury report heading into the game

"Right now, it's as good as it's going to be after five games. You're going to be beat up and bruised but looking good right now. Not sure (on Evan Anderson), maybe…We still haven't played the entire game with our starters on the defensive side of the ball."

"They all need to time to develop and get better and I think that is what we are seeing out of LaJohntay now as he's in his third year here. The experience does wonders for you and he's getting better with a work ethic in understanding to prepare. What we see on Saturdays is exactly how he practices. The whole off season he did a great job of working with N'Kosi (Perry) and being on the same page with his route running and how he's going to break his routes."

On the North Texas running game

"They're big backs that can run and they're going to commit to the run offensively. Those guys do a good job and the offensive line does a good job blocking…they don't have to change up what they do because of a back that's in the game, they continue to run their offense. But you see what their identity is as a football team and they are going to try to run the football."

On the North Texas defense

"The defense is led by their linebacker (KD Davis) and he's a heck of a football player. Both of their linebackers are really good football players. They do some things up front to try to get you. I know they've had some injuries to but it all starts with those linebackers. For us offensively it's just about executing…that's going to be a huge focus for our guys. We're playing a good team but a lot of it is on us."

Team mindset heading into the final stretch of the schedule

"We see a team that can play well and win the ball game, but we also see a team that has done some things to itself and causing them to lose. After each game you see our guys improve on some things…against Purdue you saw that we can compete for four quarters…our guys dealt with adversity well in that ball game. The problem is we keep hurting ourselves with turnovers and penalties. If we don't have those turnovers and penalties, we'd probably be an undefeated football team right now."

On the success of the running game against Purdue

"We're confident in our ability and what we're capable of doing. When we play like we're capable of, stay focused and execute we can play with the best of them. A lot of it is on us, and getting out of our own way and doing what we all know we can do. All of us just want to be consistent in doing what we do. We have a lot of talent…don't worry, just go play ball."

After night games the last three weeks, the Owls are scheduled to kick-off at 4:00 PM on Saturday in Denton. The game will air on the ESPN+ streaming service.