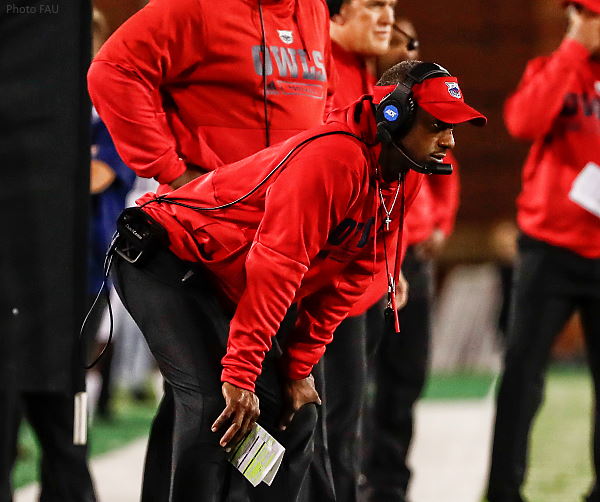 The Florida Atlantic Owls [5-3, 3-1 C-USA] look to get just their second win in nine tries against the Marshall Thundering Herd [5-3, 3-1 C-USA] - and this one is important. The winner of this game gains full possession of first place in the C-USA East division and control of their own destiny, the loser faces an uphill battle for the rest of the season.


Haggarty Family Head Coach Willie Taggart [photo] said that star linebacker Caliph Brice is "out indefinitely" with an arm injury. He was second on the team in tackles with 54, one tackle behind safety Jordan Helm who held the lead.

Here is what else Taggart had to say on Monday leading up to Saturday night's battle with Marshall:

On Filling The Void of Caliph Brice "One thing I can say about our football team is our guys have taken pride in the next guy up. next man up. And we look forward to doing the same thing. This week. I thought Eddie Williams stepped in and played well in the absence of Caliph, and we expected that out of him. I think coming into the year, we said that about ourselves on the inside linebacker group that we had some depth there, we felt good about our ones and twos, so good about it in [Antarrius] Moultrie and [Akileis Leroy] and I think they'll go in there and do well for us."

On FAU Giving Up 15 Unanswered In The Last Two Minutes vs UTSA "I go back to those last two minutes of the game, you take that out, I thought our guys did well. Even in those last two minutes. When their quarterback had to scramble and the receiver caught the ball, that was not on their defensive backs, we let the quarterback out of the pocket, we shouldn't let him out of the pocket and we were able to stay in the play and got the ball thrown down there on top of a penalty. So they got down there pretty quick and yeah, some mistakes, coaches and players, down there and then the one on Zyon, I thought he could've played a lot smarter."

On Johnny Ford "He's just coming in more focused in practice and on his assignments and what he needs to do and he's showing up on the football field. When you get out there and put the ball in his hands, he's making some plays. There are some things he can continue to be better at as well, I think he hasn't reached his peak yet. I'll just say that he can continue to be better at what we need him to, but I just like where his head is and where his mindset is in practice."

On Pressure From FAU's Struggles In Program History vs Marshall "I think the pressure is the same a sit was last week and any other week that we play, you know? That's just how it is. Our guys take pride in playing at home and I guess Marshall is undefeated there, so something has to give this Saturday. That's important to us: playing well at home and winning at home and we understand that they're going to come in here, we know them well and they know us well and it should be a really good ballgame."