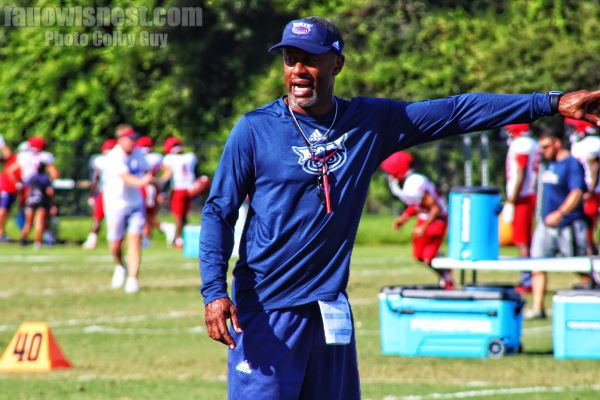 Florida Atlantic (5-6, 3-4 C-USA) is in danger of missing a bowl game for just the second time since 2017, something Owl fans have become unaccustomed to as of late.

Starting just under a month ago, a three-game losing streak now puts FAU in a must-win position. A win against Middle Tennessee (5-6, 3-4) would grant them bowl eligibility while a loss would eliminate them from any postseason play, and end their season.

Here is what Haggarty Family Head Coach Willie Taggart (photo) had to say on Monday about the Owl's must-win clash with the Blue Raiders on Saturday at 7:00 PM.

On Keys To Getting the Offense Back On Track "I think a big part of it is not just teaching our players their assignment but also teaching our players how to go out and perform in a winning way. We're competing to win, not just competing to go out there and do our job, but you do your job to win and to do it that way all the time. We've kinda gotten away from that competition and I think that played a big part in where we are offensively and that's how you get guys to focus in when it gets competitive."

On Alex Atcavage's First Start on the O-Line "I was impressed with Alex. For his first start on the road, I didn't think the moment was too big for him. I thought he held his own in there and I was impressed with what he did. I think Alex has a bright future for us, he kid works his tail off, it's important to him and that's what we need on that side of the ball, we need more guys that way."

On Lack of a Natural Pass Rusher "I think it helps when you have a natural pass rusher that can go get after the quarterback. That always helps, if you don't have that, you got to be creative in creating a pass rush to help your guys. We can probably be a little more creative in doing those things with the guys we have."

On Conversations With Administration Regarding 2022 Status "No, I haven't heard from administration about anything [regarding status for next season.] We're going to work to continue to build what we're doing and work in the right direction to get this thing right. We understand the frustration, we are trying to get it right. Nobody's happy with where we're at, but like I said after the game, I know we're going to get out of this and we know how to get out and we will get out of it."