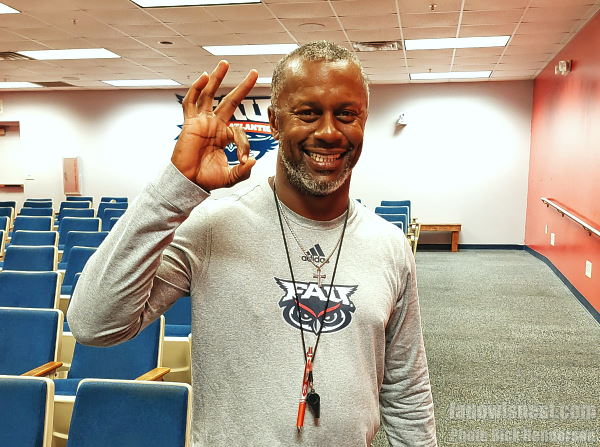 With Florida Atlantic due back on the playing field this Saturday in their home and conference season opener against Charlotte, Coach Taggart resumed his weekly Monday meetings with members of the media.

Most conversation centered around continued choices on the Owls' two-deep, with some other banter as well. Here are some excerpts from the session.

"I'm feeling great about the team, and great about everything FAU. After the scrimmage Saturday we have a good understanding on whos going to be in the two-deep and who is going to also come along and help us in other areas. We're excited about the guys we're rolling with and we'll be getting some guys back from injury who will play a factor as well."

"They call him 'Little Tag' and 'Little tag' is number two right now. He's been working really hard this entire off season. He's matured a lot since he's got here. And his execution, going out on the field and executing. He's impressed not only the coaches, but he's impressed his teammates."

On the camp experience overall

"We had a really good training camp. It was tough, and it was physical. But our players were different. We were in camp a lot longer than we've been the last two years here.  They 'embraced the suck'. I don't recall having a bad practice."

On the running back roll and overall strategy

"Larry (McCammon) is going to start for us. You're going to see multiple guys playing, and a lot of Johnny (Ford). Larry will start it off, and you never know how a game will go and it's good to have a room like that to where you can go to any one of those guys and feel good about them being in the game and not having to change the game plan up…A guy's name that should be in there is Zuberi Mobley. I thought he had a really good camp. I'm sure you'll hear about him too."

On facing Charlotte as a league game in week zero

"That first game you're just trying to keep the cob webs out. You hear it every year that most of those games aren't won, and that a lot of those games are lost to the little details. You can't beat yourself in games like this with selfish penalties and turning the ball over."

"They've got eight guys back on their offense and the quarterback (Chris Reynolds) is very good. They have some talented receivers. They do some things with shift and motion to get you to be out of balance. Chris is the guy that can make it work. We need to play with fanatical effort."

On facing the 49ers with a new defensive coordinator

"You don't have any tendencies. That's the tough part going into the first game and you really don't have any film to see exactly what they do. It's going to be important to make sure we are all on the same page offensively. It is what it is, we've just got to recognize what they are doing and be able to go execute…and do our jobs better."

On the role of Xavier Peters at defensive end

"They've got a good quarterback in Chris Reynolds, and Xavier is pretty good at going after the quarterback. So, we'll need for him to do a great job at playing great run defense but also at being great at rushing the passer. He will play."


On the growth of N'Kosi Perry at quarterback

"In the offseason he has just been on another level. Leadership, off the field, in the classroom, and studying football. That's made for a tremendous gain on the offensive side of the ball. We watched it throughout the training camp, and we're able to execute things at a higher level than we did before. I think that experience, maturity, and having your quarterback for another year is big for us."