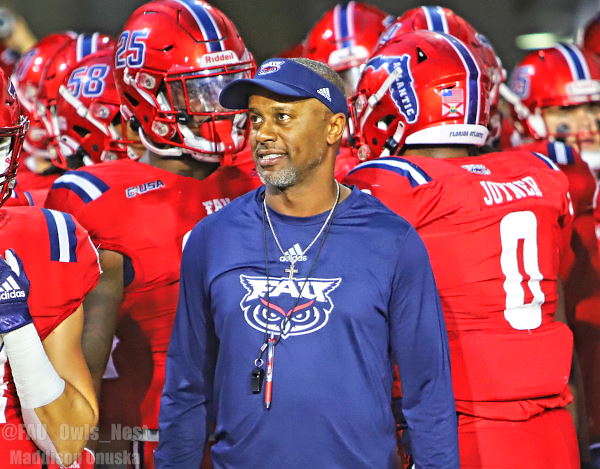 Coming off of a disappointing lopsided loss to Central Florida, the Owls resume road play against another P5 opponent in Purdue.

On Monday afternoon, Coach Taggart met with the media to provide a brief post mortem of the contest against the Knights and offer some preliminary commentary on the upcoming Boilermakers.


Decision to call the wildcat play just outside the endzone

"We had it on the inch yard line, and were going to direct snap the ball to Larry and run it behind the two linemen that we had there…they gave us exactly what we practiced but we didn't execute it…the high snap, and Larry had to jump to get the ball, so from an execution standpoint we didn't get it done."

Mindset after the UCF loss

"I think you look at the big picture of everything. We are going to on that loss, we didn't play well enough to win. You've got to take advanatge of every opportunity when they come your way, as we didn't do that. We've got a lot of ball to play. we have no time to sit around and pout and complain. We've got to continue to work to get better and that's our focus this week. Learn from our mistakes, and go out and correct them against Purdue this weekend."

"They have a really good quarterback. He's an NFL prospect. They have good receivers, and big tight ends. They do a good job of making plays that compliment each other. We've got to be disciplined."

On the Boilermakers use of safeties

"They play a safety down in the box quite a bit to help with the team that are playing RPO's and things of that nature to stop those things. Closer to the ball, the chances of them making the play are a lot higher than when they are further away. They do a good job of getting down there in an eight man box to try and stop the run and also try and stop the RPO."

"Whenever you're playing a team that can throw the ball, you want to get the rush to them, pressure them, and make them uncomfortable…we've got to play tighter in our coverage and compete…go after the ball. But I think it starts up front and being able to do some things that make him uncomfortable. The do a good job offensively with the play action when they do throw the football."

"He's a baller, he's a straight baller. He plays the game the way you are supposed to. He's competitive, he can run, he knows how to get open. He's their guy and they find ways to get the ball to him ."

"Losing our punter this off season that was a position of need for us and thankful for the coaches to have been able to go out and find Riley. The other day he changed the field position for us quite a bit. He's got a big leg and what he was doing Saturday night is huge. We need that from him each and every week. He did a great job."

The Owls are scheduled to kick-off against Purdue at 7:30 PM on Saturday and the game will air on the Big Ten Network nationally as well as the Fox Sports app if available.