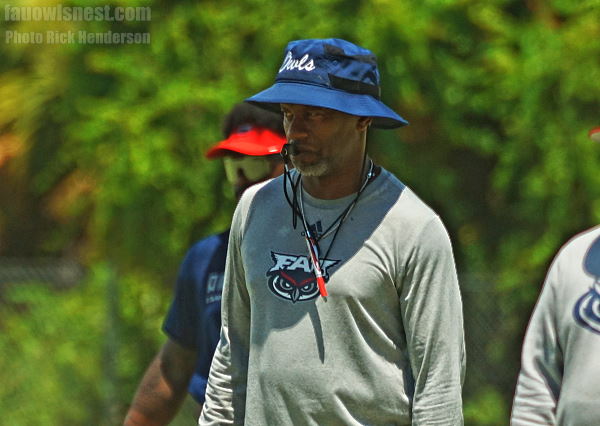 Now on the back half of the year, and coming off of back-to-back road games, Florida Atlantic football returns to the friendly confines of FAU Stadium and Howard Schnellenberger. On Monday Coach Taggart met with the media to recap the bye week activities, and take a first look at the incoming western division Rice Owls.

On what they did during the bye week

"We really honed in on ourselves, and fixing a lot of problems that we saw from the first six ball games. We tried to focus on those things and how we can get better. We looked at things…from a play calling standpoint, we looked at personnel, when we had guys in certain situations to try and find ways where we can put our players on the right position. Most importantly, where we can simplify things so they can play fast, and not think so much."

On Evan Anderson and the overall health of the team

"He's been progressing really well, I'll go from not playing to 'probable'…He's been cleared to practice."

"I feel like going into this game we'll have more of our team coming into the season the way we thought it would be. We'll be closer to that than all season ling. This bye week cam at the right time for us, to get some guys healthy…and heal from some injuries."

"Recruiting is like brushing your teeth and combing your hair, as soon as you stop you start to look bad. Now, it's non-stop. Getting information on the young men, and academics, and things of that nature. Finding out as much as you can, to see where they are at so that you can help keep those guys on track. It's another part of the process for us to solidify who we want to bring into this class. It's going well. Our guys were able to get out to quite a few games."

On what he's see so far on upcoming opponent Rice

"They are a well coached football team that plays to their strength…They play with great effort and take advantage of the mistakes you make in the game. The find ways to win and they play you for four quarters."

"They give you a lot of different personnel groupings, and when that happens you have to be locked in and understand who is in and what they like to do out of those groupings. Our coaches and players have got to be on top of that because they get in quite a bit…and that's a little more challenging than playing a team that's always going to be in the same."

"They are big and strong up front. They play a lot of man coverage, put a lot of people in the box and stop the run and make you try to be accurate throwing the football."

On the team's mentality after losing 4-of-5

"Our guys have been in a great mind frame this bye week. We've had some really enthusiastic and competitive practices, which was good to see. Walking through the hallways on the days off you see guys walking around in here trying to get ahead. Mentally I think our guys are in the right frame of mind. Nobody here is happy where we are at when you look at our record. We feel and know we should be better than what our record shows right now."

FAU will celebrate Homecoming when they take the field against Rice at 6:00 PM on Saturday. The game will be available on the ESPN+ streaming service.