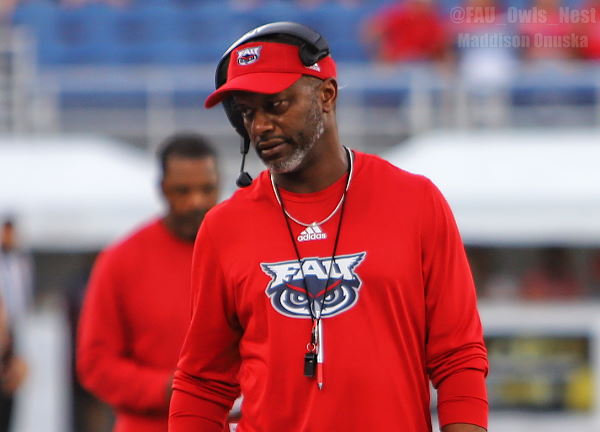 FAU Football has just four games left in the 2022 season and find themselves in a major fight to become bowl eligible.

Immediately standing in their way is a Saturday meeting with UAB, who brings in a nationally ranked rushing attack.

On Monday Coach Taggart held his weekly media session to conclude thoughts on the week eight's loss UTEP and look ahead to the the Blazers.

Below are some highlights of what he shared.


On Jaylen Wester filling in for Eddie Williams


The pressure of tallying yet another road loss

"The pressure is there from day one, not just because we are losing. That's college football, you've got to win. You've got to get better, we all understand that. But we've got to stay focused on what we need to do to improve. It won't change unless we stay focused and make those things happen. The one thing I do know is that this can be a good football team. We've got to stop turning the football over. That's the key for us. That's three road games now where we've lost…because of turnovers…We've got to score more points down in the red zone. If you look at it this year, we have had six turnovers in the red zone."


On UTEP getting to the quarterback


On why the team comes out flat in the 2nd half

"I think it's more of an execution thing. You say flat, but I don't think we were executing in the first quarter, or in the 2nd quarter. I think it all goes back to executing, and getting the ball to the ball players - they guys that can make plays for us. It's not just a third quarter thing, it happens a lot more than that."

"We've got to run to the ball, and tackle well. What we're going to see this week is pretty much what we've seen the last two weeks. You've got teams that run the football and love to hold the clock and time of possession. It's going to be key for us to stop the run. They have some really good running backs and the o-line does a great job of a running scheme. They do a good job of creating extra gaps so we've got to do great job of filling those and try to get some takeaways."


On Blazer running back DeWayne McBride

"He's really good, he has great vision, he's got patience running the ball. He's explosive through the hole. Once he decides to go, he goes. But he has a great understanding of how they are blocking things and does a great job of setting up blocks. He's a strong plyer, runs behind the shoulder pads. He's by far the best running back we've seen this year. Big time challenge for our defense."


On the UAB defense

"They've got a lot of guys back, they play well together. They've been in this system for a while and you can tell now just by the way  they play. If you look at them it's a lot of the same guys we played against last year. They key is taking care of the football. Last year we spotted them 14 points and had four turnovers in that game. The key for us is taking care of the football."


On this game being a must win situation

"All four of them are must win games. Every game we are playing, for us, we're trying to win and be consistent when it comes to winning. Our goals are still ahead of us. But they're not going to be achieved unless we do the things we need to do in order to win. We've got to go take care of business."