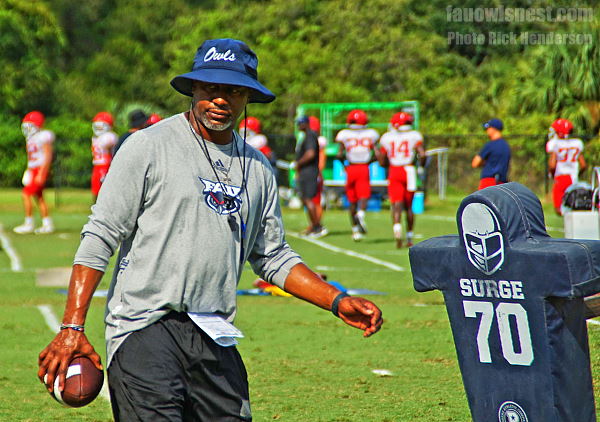 Sporting some national offensive rankings after a blowout victory over Southeastern Louisiana, the Owls will be hosting their biggest game of the season at Schnellenberger Field on Saturday. On Monday afternoon, Coach Taggart met with the media to celebrate the win against the Lions and offer a first look at the Knights.

Here are some highlights of what he had to say during our time together, including progress on the offensive line, secondary, and a couple individual players, and more.

On the progress of the offensive line

"The guys playing with each other, that by itself, that experience really helps. Consistency in some of the things we are doing scheme wise is really helping, and the guys buying into the things we are trying to do. Those guys knew they were going to be the strength of our football team and they take pride in being that. I think Coach Warriner has done a great job with those guys. Everyone is more on the same page."

On the play of Jacob Merrifield in critical reserve time

"He balled out. You might take it for granted, but the effort he plays with. They get somebody to block him but he doesn't stay blocked. He get's off the block, then he goes and gets an assist on a tackle or a tackle by himself. Having a big guy be able to run sideline to sideline is always good and we're going to need that from him."

"We believe in what we are doing and our guys have to trust their training and go out play winning football. We can't go out and beat ourselves. They are a good football team, but just like any other team we play we have to play our best. Every unit, we all have to be on our a game, offense, defense, and special teams. We've got to be able to stop the run. They want to run the football, and we understand the challenge that comes with it and we are up for the challenge. We are looking forward to this game on Saturday. We still haven't played our best. If we do, we'll get really good results behind that."

On progress in the secondary

"On Saturday guys played their assignments and were so much better fundamentally. It paid off for us. The guys did a good job of tackling, especially not allowing too many yards after catch. Our backers were better dropping into a zone when they did. All the fundamental things I had talked about I thought our guys fixed. Didn't play perfect. That's the beauty, keep getting better each week."

"We knew at the beginning of the season that LaJohntay was going to be one of our biggest weapons. He is showing that. You put the ball in his hands he's happy with that. We've got to continue to find ways to get him the ball and touches to help us along with some of the other guys."

On the topsy turvy upsets of the G5

"It's hard to win in college football. Sometimes you take it for granted because of the path, or certain conferences these things are 'supposed to happen' that's what the average person thinks. But times are different now. It's hard to win a college football game. You've got to come ready to play and ready to focus each and every week. Social media, that's real. And you've got 115 guys you have to get on the same page. That's tough for most teams to stay focused. It's hard to win no matter who you are."

The Owls are scheduled to kick-off against Central Florida at 7:30 PM on Saturday and the game will air on the CBS Sports Network nationally as well as their online streaming service.