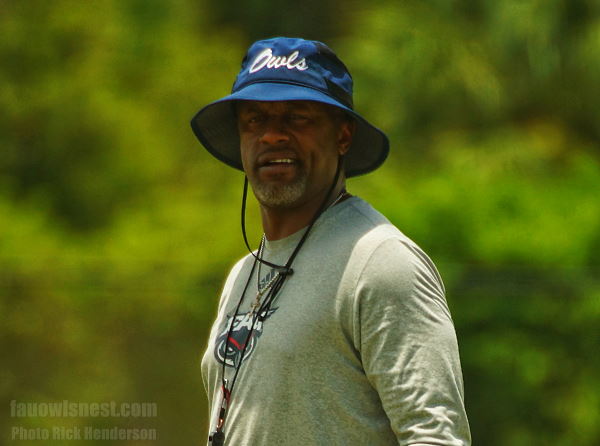 The Owls picked up the preseason camp action again on Thursday with the second straight day of split sessions, which sees the team divided into separate units based on experience. It offers younger players more opportunity to get in valuable reps, but also affords the coaching staff a more intimate role in leadership.

Prior to the start of the day's first session, Coach Taggart had a chance to meet with members of the local media on the heels of the national headliner for Conference USA Wednesday afternoon.

Taggart was very positive in his assessment of the team overall, and likes what he sees on a number of levels as the Owls will look to regain their spot in the leader's position for the 2022 season.

Below are some of the highlights of what he had to offer.


On what to look for in fall camp

"You're going to see some guys doing some things from the spring but doing it better. Bodies are changing and guys are developing into the players we need them to be."

"You've got a lot of talented young guys in here. Those guys will get really good individual coaching from the coaches. The more you do things the better you get at them. Develop and compete. If some guys in group one don't do a good job, they will go to group two. It's been cool to keep it competitive like that."


On positions he would like to see competition at

"At the tight end position, at the guard position, and tackles position…running back position, we need a guy. We feel like we've got plenty of guys to choose from, we just need those guys need to separate themselves."


On the health of team overall and overall depth

"We're rolling with it, we've got everybody out there. You go back to spring camp and you know what you have, but you also recruited well. You've got to give those guys an opportunity. It's up to the old guys to keep their jobs, but I think we have the depth where e can play a lot of players. We've just got to make sure they are ready."


On newcomers who have stood out

"Morven Joseph (linebacker), he's different. He's a football player and plays the game the way you are supposed to. He's gotten stronger, and he's gotten better. And Jamie Pettway (linebacker), they both had a good spring. At the defensive back position, Daemon Hill has been exciting to watch compete. Also freshman Mike Boone has been impressive as well.


On what the team needs to do

"We've got to get out of our own way and play winning football. We can't rest on our own laurels. We've got to go back to where the program has been and live up to those expectations. I think we've got experience, and looking forward to the guys doing it."


On coordinator and staff changes

"I think having the new coaches has brought some energy to our program. They have done a great job of really getting to know our players and spending time with them away from football. You can see how the guys have responded to them. The energy and comradery they bring, both the offensive and defensive staff, has been cool from my perspective to watch. You see the guys understanding each other and what we are doing. It's deep."

FAU will hold closed practice activities Friday, and will be back on the practice fields Saturday for a combined session that will offer the general public a viewing window beginning at 12:30 PM at the Schmidt Family Center.