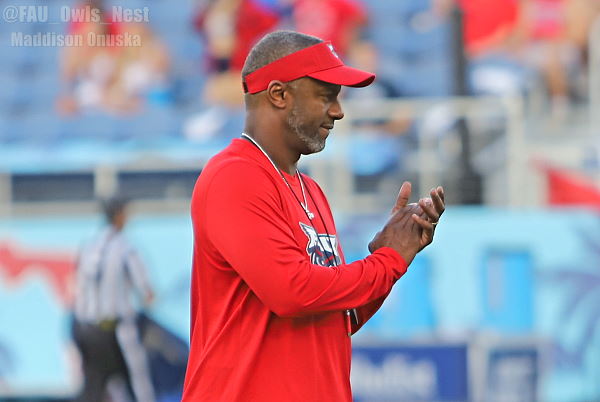 FAU Football got a much needed win on Saturday at Schnellenberger Field against visiting Rice. It was a defensive game on both sides, but the Owls came out on top thanks in part to three well timed interceptions.

They will now turn their attention and travel plans towards UTEP.

On Monday Coach Taggart held his weekly media session to recap the weekend's victory and offer initial feedback on the Miners.

Below are select excerpts of what he shared.


On what could have been done better against Rice

"Offensively, capitalizing on the takeaways that we got. The defense did a great job getting the ball back for us and getting us in good field position and we didn't take advantage of those opportunities. We had plenty of them which could have made the game totally different for us."


On what went right against Rice

"I thought we did a great job controlling the clock, which  was really good for us. It helped our defense, but our defense did a great job for themselves by getting off the field. The first half of the season was really bad for us. They worked hard on it during the bye week and it paid off for us in that game getting off the field on third downs. Getting the takeaways was huge. That's the kind of ball we need to play. Our guys didn't flinch in this game when there was plenty of opportunity to, and divert back to old ways. We said we wanted to shut down the run, and our guys did a great job of shutting down the run."


The game balls go to

"Defense…actually went to Armani Adams. He did a great job, happy for him and proud of him. Everybody, the entire team, was so excited for him. Larry McCammon got offense, and Riley (Thompson) got special teams."


On Evan Anderson's return to the field

"I thought he made his presence known. He was out there. Having 'Big Ev' out there those holes weren't as big as they have been before. He did a good job being in there. In control of his gaps, and he made some plays. For the limited amount of plays he played, I was really impressed with what he did for us."

"What you saw was really Johnny's first game back. The other games he really didn't practice as much. The North Texas game he was sick so he didn't play in that football game. It was really the first game where he had a whole week of practice and was able to go out and execute the plays we had for him. We feel like we have a running back room that is really talented. And Johnny is different than the other backs we have. He can do a lot of different things for us, so we're going to continue to be creative in how we use Johnny."


First look at the Miners

"I think it will be another one of those games from a possession standpoint. You might not get as many because of how they control the ball and run the football. Defensively they are stout up front. They have their entire defensive line back from last year and a couple of linebackers. A talented football team and on the road it's going to be another challenge for us."


On getting a much needed road win

"Coach Orlando and the defensive staff did a great job during the bye week of evaluating the first half of the season and the things that were good or weren't good. One of those was gap integrity. Making sure guys are always in their gaps, and not just in the gap, but dominating them. I thought the guys did a great job with that on Saturday versus Rice. If you look at a lot of the big runs in the first half of the season against us we weren't even lined up correctly. They did a great job of cutting out some things we were doing so there wasn't as much confusion, and not as much communication. It allowed our guys to play faster and make the plays we knew they were all capable of making."