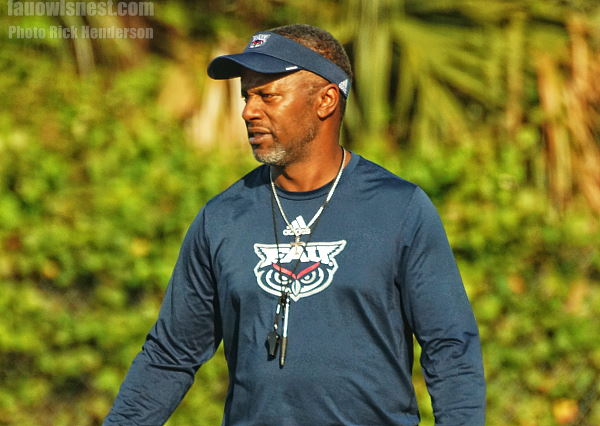 Florida Atlantic is now in the final week of the 2022 regular season and has a tough task lying ahead of them to become bowl eligible.

On Monday, Coach Willie Taggart met with the media to finalize the Middle Tenessee loss and look ahead to a very important game against Western Kentucky.


What went wrong against MTSU

"Pretty much everything you can think of went wrong. We didn't play that well in all three phases. We didn't coach well, and got the results behind that. Very disappointing. We had a great week of practice. We definitely didn't play like we are capable of, or like we've seen the two previous games."

On the turnover in the red zone

"They all come at that critical time. You've got to take care of the football. You see those turnovers, they've all been fumbles down there. And that's being just careless with the ball. The inch yard line, you've got to protect it. All of them have been in critical moments too this year when it happens to our team. Very frustrating and disappointing."

On Zuberi Mobley getting limited touches

"I think a lot of it is just the way the game went. Throughout the year we have these games like this where we get behind pretty quick and that can change up the game plan for the most part. We didn't do a good job of running the football but a lot of that had to do with getting behind so far and then having to throw the football to get back into the game."

On the Blue Raiders success in the passing game

"We had guys playing so far off the ball, and what was really disappointing was the missed tackles. I think we had like 25 missed tackles…for like 15, 20, 30 yards. That's why they got all of those yards because we were just horrible when it cam to tackling and pursuit angles."

What has to be done to beat Western Kentucky

"This is a really good football team coming in here. The one thing we've got to do more than anything is we've got to do a better job of tackling in space because we are going to see a lot of the same things from Western that we saw in the Middle Tennessee game."

On the play of Hilltopper quarterback Austin Reed

"He's got a really strong arm and a quick release, and he has some very talented receivers out there and a good o-line. He has everything to be a good quarterback - a good arm, protection, and the knowledge of their offense. I think this is going to be one of the most talented football teams we play this year."

On the importance of making a bowl game this season

"It's very important for a lot of reasons. First and foremost for our guys and our seniors - guys like Nick Weber who's played so much and done so much for our program. It would be great for him to leave with a bowl game. And for our program and where we are going, being able to continue to build on that. Last game of the year you always want to win that, so the importance is sky high for this game."


100% thought the same thing. Say whatever you want about Charlie Partridge as a HC. I never got the sense he was apathetic in 2016 when I heard him speak, especially after losses.

Just once Id like to see someone from FAU flat out say were angry and we know this doesnt live up to the standard.


Not trying to read too deep into things, but the FAU twitter picture changed from a pic with him to a pic of the team.

posted Nov 21st 2022, 5:41 PM
I have it on good word that the banner picture change on the football house account is completely unrelated to anything involving Coach Taggart.

I have it on good word that the banner picture change on the football house account is completely unrelated to anything involving Coach Taggart.
Posted On: Nov 21st 2022, 5:41 PM #410613


Absolutely nothing. I mean, why would the next coach consult the previous coach on the team's twitter page? Wah-wah-wah-wahhh.