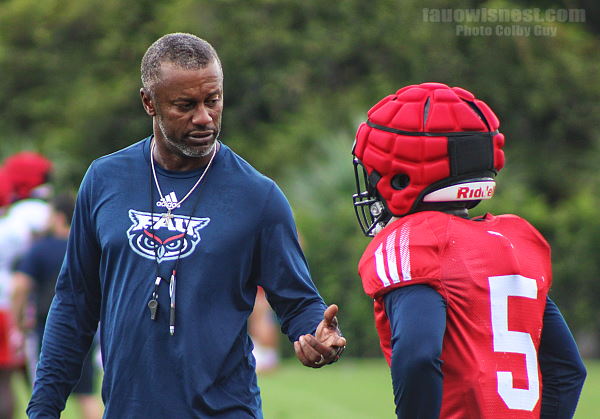 The Florida Atlantic Owls [3-3, 1-1 C-USA] were banged up after the bye week, with quarterbacks N'Kosi Perry and Nick Tronti each not participating in practice last week, but FAU Head Coach Willie Taggart [photo, left] was ready to name a starter for Thursday's matchup against Charlotte [4-2, 2-0 C-USA] today. "[Perry] practiced. This week, he had a good practice and he's playing," Taggart said. He mentioned that the full team, including safety Jordan Helm who missed practice last week, is healthy and ready to go for the pivotal conference matchup against Charlotte.


Here is what else Taggart had to say on Tuesday leading up to Thursday night's clash with the Charlotte 49ers:

On Snapping 0-3 Road Streak To Start The Season "Well I think it's gonna come a time when we got to put it all together and that's what we're banking on, going on the road and putting it all together and trying to get a win, you know, we know what's at stake. Our guys had a good week of practice. The energy is there, the focus is there and, again, guys know what's at stake and we had gone on the road, not talk about it but go be about it"

On UNCC's Fifth Year QB Chris Reynolds "He's been there too long for me and it's only been a year and a half. He has such command on the offense, a great understanding of the offense, so he rarely gets in a bad position because he has an understanding and knows where all the outlets are within the offense, you know, but I think where he really hits you is with his feet. When things aren't there and being able to take off a run and pick up a first down is tough, you know, so we got to do a great job containing him and not running past the quarterback. Try to try to hit him, you know, but he's so elusive and smart and competitive as a talent, we saw that last year and you see it when you watch the field so we got to get guys to a ball, try to hit him and rattle him. Not that that really gonna affect them. He's such a good player, but we got to do our best to try to hit him and get him on the ground is the king of what goes on with our defense."

On What He Wants To See To Open Thursday's Game "Focus, focus, and a lot of energy and early execution. That's been our Achilles heel on the road is bad execution, early in the game. You know when we find ourselves behind two touchdowns or three touchdowns in the first quarter. Again, It's tough on here we play it is tough to do as tough mentally on your entire football team we put yourself in that position so what I want to see out of our team is not being in that position for once. On the road, and I think that by itself will make a huge difference in what we do and how we, how we go about things."

On Getting Ahman Ross More Reps  "You know, that's the plan is to give him more reps, he's not getting as many as last year and I know he and [Korel Smith] are splitting time at the nickel position, but the plan is to get him more reps. I know the defensive scheme is different than it was last year, you know, I'm doing what we're asking my guys to do but mas made a lot of plays for us over the years and in these to be on the field helping so that's been talked about and discuss the defense staff and myself and Ahman and look to see if things get better."

On Getting The Run Game Going "Well, I say when we run the ball and we stop the run, we win ballgames. It's a pretty simple formula and we got to go do it. Again, we know what it takes to win, we know we have to do, it's got to go out and do it and I think, again, on the road, we put ourselves behind the eight ball early in games and it's kind of gotten us away from the things we like to do, you know you get down so much it's hard to just run the football like you want to and then you start playing left-handed and guys, pin the ears back is really good at the so starting fast helps with a lot of things."