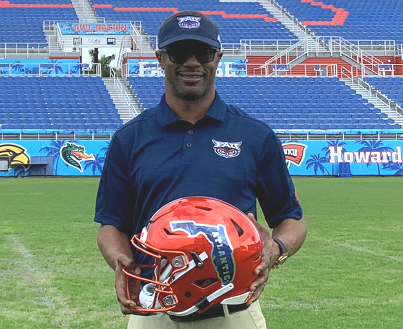 With little ability to work with and coach current players on the roster, college coaching staffs around the country have spent much of that time recruiting.

FAU head football coach Willie Taggart and his staff have taken advantage of the historic commitment pace, landing thirteen verbal pledges to date, giving the Owls the early lead as the number one recruiting class on Conference USA, according to 247sports' class points rankings.

The thirteen commitments are by far the most verbal commits FAU Football has ever had at this point in the recruiting calendar.

Charlie Partridge's "Fab 15" class is the second most, which had five as of this date in 2014.

"Coaches are doing a great job of building relationships and getting them to believe in our philosophy and what we want with our program,'' said Taggart.

So far, the class has been headlined by players like wide receiver Frederick Eaford, defensive end Julias Barfield, and wide receiver, Jahmal Edrine - all choosing FAU over Power Five competition.

Outside linebacker coach and recruiting coordinator Raymond Woodie has been credited as the primary recruiter on five of the commits so far, giving him the lead as the top recruiting assistant in Conference USA, per 247 Sports.

Despite being one of the most competitive and challenging positions to evaluate, offensive line coach Jeff Norrid - along with area recruiters - have also done a great job in adding to the offensive trenches.

In December, coach Taggart said he would make it a point to focus on recruiting the tri-county area of Dade, Broward, and West Palm Beach.

And he has lived up to those words, as seven of the thirteen commits hail from Broward or Dade county.

The philosophy has not stopped the staff from turning over rocks nationally, either.

Three-star safety Jatavious Magee will travel the nearly 3,250 miles from Federal Way, Washington, to be a part of the Owls.

Co-offensive coordinator and quarterback coach Clint Trickett also picked up a pledge from an out of state prospect.

Running back Reginald Davis, a native of Montgomery, Alabama comes FAU from a state that produced quite a bit talent for the Owls in recent years.

Despite the success, the staff has had to overcome obvious obstacles provided by Covid-19.

"Usually, you get out and see players practice once, possibly twice, but we have had to rely heavily on film and relationships with coaches to get all the information on a kid, so that has been an adjustment,'' Taggart explained.

He also emphasized the importance of having a strict philosophy in what they are looking for in prospect evaluations.

Though the first thirteen spots are all high school prospects, Owls fans can expect some of the twelve remaining places to be filled from Junior College ranks.

Wide receiver and defensive line are positions that will require added experience heading into the 2021 season.

And as always be on the lookout for additions via the transfer portal after the 2020 season.

For updates on that, and more, stay locked into FAUOwlsnest for all your FAU Football recruiting coverage.