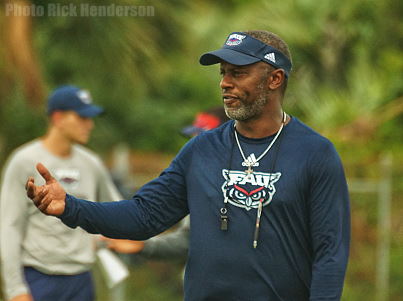 FAU head coach Willie Taggart met with the media on the first day of classes to give an update on the state of the Owls. With the team's week one matchup with the Florida Gators just 12 days away, here is what Taggart had to say.

Opening Statement & Naming the Season Opener Starters  "I like the way we acted out two weeks before game week and this week we want to continue to figure out what we're gonna go with, you know, we're still evaluating some guys to get better, and we got practice tomorrow. We need to do some more evaluation, but really trying to hone in on some days and really figure out which guys we're gonna go with, especially with me today, and hopefully, you have a clear understanding of that by the end of this week."

Regarding the Quarterback Situation: "When we feel like we have that guy, we going to name him. We're not going to name anybody until we figure out who were going to go with. Hopefully, that's way before the the Florida game."

On the Single Digit Players Being Announced Today: "They are guys who go out and execute every single day the way we want to with , and play with the kind of passion and physicality that want them to play with. Guys that we can count on day in and day out. Every day they practice at the level l we want them to and all of those guys are going to help us."

Nick Tronti Being the Only QB in Single Digits: "I wouldn't say [he's winning the quarterback battle] by numbers, some guys didn't want single-digit number changes, so I definitely wouldn't go off of that."

On How Javion Posey Will Be Used in 2021: "Our plan is to put him in and make plays for us. Javion is one of our better athletes on our football team, and we plan on using him in a lot of different ways that will help us be more explosive on offense. You'll see him all over the field - running back, at receiver, as a quarterback, a little bit of everywhere."

On Numbers in the Running Back Room "They all got reps throughout training camp, and they all worked with certain groups with groups. We had three groups, they all rotated. We had certain plays with certain guys. We have a lot of running backs and our guys understand not all of them can play so every rep they get they've got to take advantage of it."

On What He Wants to See From the Team in the Next Couple Weeks "Just being very detailed on the little things. The last scrimmage was a good barometer for all of us to see where we are at and see how much more we need to improve before the first game. I thought there were a lot of little mistakes in that scrimmage that we've got to correct, both players and coaches. We weren't really as detailed as I'd like for us to be in the first scrimmage."

On Covid Vaccinations "We have a group of guys that are ready to play and I'm proud of those guys and they're happy with each other. Hopefully, we get to 100% soon."