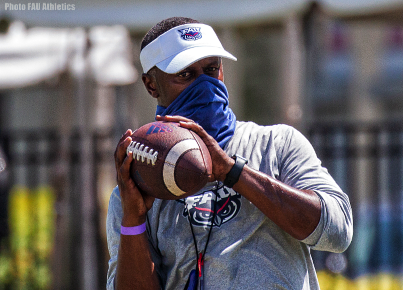 Coach Willie Taggart met with the media for the first time since naming N'Kosi Perry as the team's starting quarterback. Perry will lead the Owls onto the field in Gainesville five days from now, as the Owls have their first and toughest test of the season in the No. 13 Florida Gators. Here's what Taggart had to say heading into game week.

On Naming Perry The Starter

"First, I would say it was a really good competition throughout training camp. I was really impressed with all of our quarterbacks and the way they competed and I personally feel really good about that room. As we go into the season, we feel better than we felt before. So, with N'Kosi, I think him coming in, you can tell the young man had experience playing the position at a high level by just the way he carried himself and the way he is with his teammates. But considering the fact he didn't have spring ball and came into training camp and knew enough of the offense to be able to compete said a lot about how much he studied and how much he wanted it. As he continued to get reps, you could see that he was getting comfortable and things were starting to happen with a lot more force. So, you put on top his experience playing in big games of this nature and basic environment, so you know when he gets those reps, he's going to make the team better."

"They say it was a great competition and the thing about them all is they've done a great job working with each other and trying to help each other out on certain things. When we made a decision, we told the guys where we were going and who we were going with and there wasn't much of a reaction. I'm sure guys were disappointed,  but they all knew we had to pick somebody at some point and go with it, and knowing in today's environment in college football, you gotta stay ready, you can't sit back and you don't have time to pout. You gotta be ready because you never know, one day you make a start, something's going to happen to you and you're going to have to step right in, so our guys understand that and it's going to be important for whoever the backup is to get ready to go."

On Possibility Of Switching Starters

"I wouldn't say no matter what happens, you never know how the season is going to go, but we selected N'Kosi to be our quarterback and that's our plan. He's our quarterback going in, we're not going to play musical chairs or anything of that nature. I know last year you saw us do that when we were still trying to figure out our own team, players, and things of that nature that we didn't have an opportunity to with spring ball, but again, we chose him to be the quarterback and we expect him to be the quarterback."

On Challenge Against Florida On Saturday

"They have a lot of talent on their football team on both sides of the ball. They have a very young football team and a well-coached football team. A big challenge for our football team going in there in the Swamp and playing the Gators. They lost some talent from their team this past season, but they've done a good job recruiting over the years. They're ready to go, they lost [Kyle] Trask, but Emory Jones has played a lot of football for them over the years. Coach Mullen has done a great job with quarterbacks over there, so you know it's a big challenge for our guys. Not just a big challenge, but a big opportunity for our guys and they're looking forward to it."

On Gameplanning Against A New-Look Gators Team

"It's different because you don't know who's at what spot, but the one thing you know is that they're the Gators and they're filled with talent, so they're going to have talent at every spot. You gotta come ready to play, so no matter what the name is on the back of the jersey,  you know there's a guy out there who can play football at a high level, so you gotta come play your A-game. At the end of the day, it comes back to us and understanding us and what we're doing and doing it to the best of our ability. It's not going to matter what's on the other side, it's going to matter about what we're doing and we're going to try out there to beat our opponent."

On COVID Policies And Vaccinations