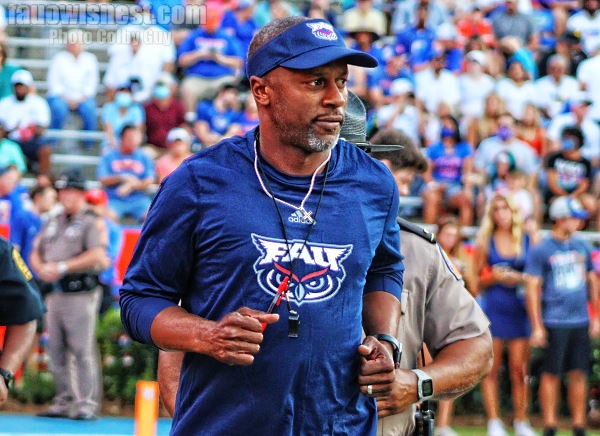 Following a tough 35-14 loss to No. 13 Florida, Florida Atlantic head coach Willie Taggart met with the media on Labor Day to discuss the team's game plan heading into their home opener against Georgia Southern.

With FAU's 2020 leading tackler, Chase Lasater, officially back in the fold, Coach Taggart exclaimed "Chase is back".

Here is what else he had to say on Monday.

"I think we saw a little bit of both positive and negative out of that game. I thought we were sloppy at times, I don't think we were as sharp as we needed to be as a coaching staff. Our guys played hard, they competed, they showed they could play with [UF], but we made too many self-inflicted wounds to win that game. We didn't play winning team football, you go back to our defense that got two turnovers and we didn't do anything with it offensively. We had seven out of 11 drives past the 50-yard line, and we didn't score as much as we should have. When playing against a team like Florida, when those opportunities come, you have to take advantage of them and we didn't do it in that ballgame. I felt we could've played better and we can't have those turnovers as well."

"I'm really excited for John to have the game that he had. Having the whole year off with that injury was really hard to get back [from] and to see him come back and compete for that first catch, I know that our sideline was happy, you can see his teammates were really fired up about it. Not only to have the first catch but to make someone miss and get some YACs (yards after contact) out of it, I think that really boosted up his confidence, but I was really happy with his blocking. I was really impressed with his blocking because he didn't have to block because he didn't get to face anyone in a game during practice. So, seeing him in the game and seeing up against those guys on Florida, I was really, really impressed. I know what John can do when it comes to route running and catching the football, but being asked to block 260-pound guys, you don't know until you get in the fire and he stood up to it. I was really impressed and I can see a future for John at tight end for us.

On Youth In The Defense

"Those guys got a lot of reps during training camp, but you know going in that they were going to make some freshman mistakes, but you know they're going to play hard. For those guys, it was a good experience for them from a physicality standpoint Florida and seeing what it was like playing against that competition. But those guys did some good things in the ball game and like everyone else, they made some mistakes and some good plays as well, but I was happy with those guys and we got a young team and I think you continue to see a lot of young guys playing for us."

I think you see a different style of offense when we're playing Georgia Southern. They're going to run the football. They're going to run, run, run, run run, run, run and catch you slipping and throw the football, so we gotta do a good job schematically and get our guys in the right position where they need to be. We gotta line up first and foremost, especially against a team like Georgia Southern when there's going to be a lot of responsibilities on our guys to be able to line up to it and then getting everybody to the ball, we gotta do a great job of tackling everybody. We know that's gonna be something that's coming at us and we got to do a better job, we can't give up rushing yards like that."

"You gotta make a few tweaks, you can't just overhaul everything in one week. We had all spring and training camp working on your defense, you know, I think when you play an option football team, because we're guys who have responsibility guys who are they responsible for, and you got to stay true to where those responsibilities are, if you have the quarterback that you need to take the quarterback. If you have the [running back] you need to take the [running back.] It gets you in trouble when guys don't do their job, they fall for some of the window dressing or try to do more than what was asked of them. When you play an option team, you have to be really disciplined in your assignments."