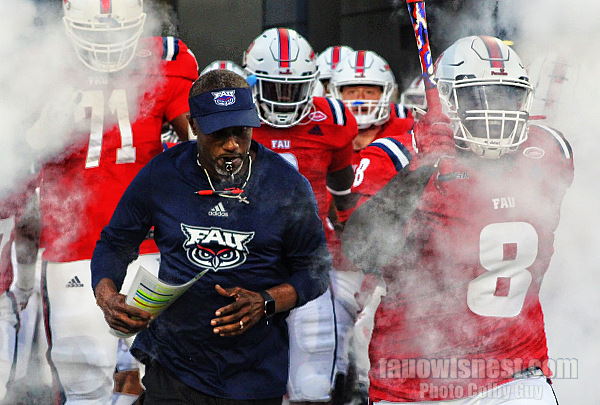 After notching their 10th straight win at home last week with a 45-14 win over Fordham, the focus for Head Coach Willie Taggart [photo center] and the Florida Atlantic Owls now shifts to securing their first win on the road. It won't come easy, however, as they are tested by a high-powered triple-option Air Force Falcons offense that also has a sneaky passing attack. On Saturday, Sept. 25, FAU will be going from the friendly confines of Boca Raton, which is at 13 feet above sea level, to the US Air Force Academy in Colorado that stands at a whopping 6,788 feet above sea level. Such a drastic jump in elevation calls for a new challenge for the Owls, as they get ready for their second road game of the season.

Here is what Taggart had on his mind on Monday leading up to Saturday's game:

On The Elevation in Colorado "I think we gotta try to continue to do what we're doing to try to prepare for the game the way we prepare for other games and try to be at our best when it comes to executing our plays and our assignments and the things we need to do. When it comes to altitude and things of that nature, there's no way we can bring the altitude here to Florida and practicing all of that stuff. The only things we can do is control the things that we can, which is the way our practice happens and building the winning things that it takes to win ballgames. I don't think we can get caught up in the altitude and all of those things. I've coached out there in Wyoming and they had a big sign that says you're 27,000 feet above sea level and it felt no different. We're playing football, I think some of it was just a distraction and we're not going to let it distract us and we're gonna go out and play, it's all we can do."

On Kelvin Dean Jr.'s Breakout Performance Last Week "What Kelvin did in the game was good for our football team and it was good for him. I know he had a run early in the game where he missed a hole and coach got on him and he thought he wasn't gonna get any more reps and he's like 'coach believe in me, it's my bad' and we told him, 'we believe that you're going to get back out there, but you got to take advantage of opportunities when they come.' He got an opportunity to get in the game and he took advantage of it. It was good to see, it was things we seen from Kelvin in practice. One thing that held him back a lot from playing time was just taking care of the football and he's done a tremendous job this training camp and this fall of getting better with taking care of the football and then it paid off in the game on Saturday. So are we going to see more Kelvin Dean? I think he's earned the right to see more of him and I think we'll see more and more and more if he keeps playing the way he did the other night."

On Larry McCammon's Success At Both Fullback and Running Back "Larry's kind of like our junkyard dog, he does a little bit of everything for us. It's great when you have a player like that and again, he's a team player for us, but he adds another dimension to our offense when he can do those things. He can play running back, he can play fullback, he can play special teams and whatever it is we ask him to do, he's all for it and it adds another element to our offense in a way where we can get some of our better players on the field."

On Air Force QB Haaziq Daniels' Ability To Throw The Ball "[Daniels] has done a great job throwing the ball, so that's another thing in there you gotta worry about. It's enough as it is when it comes to the run game and if he can drop back and throw it the way he did last week, it's another challenge for our guys. We got to be very simple, in games like this, our d-line has to step up or it's gonna be a physical ball game. They're going to run the ball and we got to do a good job of taking care of the trenches and run into the ball."

Takeaways from FAU's Victory over Fordham