Also, I hope that Prime is actually being considered. This is…

You are 100% correct about the pay! I sure hope Liberty had a… 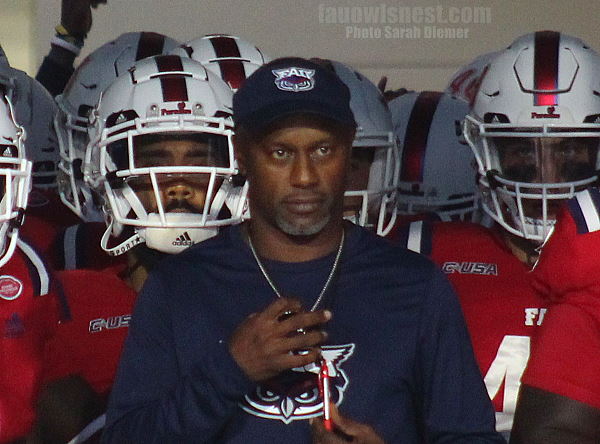 The Owls are coming off of a disappointing 31-7 loss to the Air Force Falcons. For the third time in four weeks, Florida Atlantic was held scoreless in the first quarter of the game. It took until 3:42 to go in the second quarter when quarterback N'Kosi Perry ran the ball up the middle for a 34-yard touchdown run. FAU had a hard time stopping the Falcons' rushing attack, giving up 446 yards to their triple-option offense.


Now, the focus for head coach Willie Taggart [photo] and the Owls shifts to a familiar foe in FIU, as they start the 2021 Conference USA schedule with the 20th Shula Bowl. The Owls own the 14-4 advantage in their rivalry and return to the friendly confines of Howard Schnellenberger Field, where they have a 10-game win streak.


Here is what Taggart had to say on Monday leading up to Saturday's Shula Bowl rivalry match:

On The Message To The Team Following The Loss "We watched the film and saw what and how we played that game. We saw the mistakes we made, there were a lot of missed assignments in that game. We talked about correcting those missed assignments, you can't play games like that. You gotta know exactly what you're doing, especially when you're on the road. [We also talked about] how one guy can mess it up for everyone and to be able to totally focus on that ballgame. I didn't think we were really focused where we needed to be focused in that ballgame and it made a difference in the ballgame, but the bottom line is that guys got to know exactly what they're doing and we got to execute."

On Shifting Focus To C-USA Play "All of those games matter. I think those first four games that we played were really trying to establish an identity and establish who you are as a football team. You gotta try to go out and get yourself ready for the conference opener and get going for conference play. We didn't go through those four games the way that we wanted to, but we learned a lot about our team as we go into conference play and now we gotta build on our strengths and then really correct those things that we're weak on."

On The Shula Bowl "I think everyone understands the importance of this game. It's a rivalry game, I know our guys and everyone associated with our program knows how important this game is, so there's a sense of urgency and understanding the importance of this game and then you add on the beginning of conference play on top of it, it's a huge game and for games like this, you can throw the records out and you gotta come ready to play."

On Playing In A Rivalry Game "A lot of times in a rivalry game, you know guys from the other team. A lot of times, you know them very well, a lot of your friends and teammates you played with in high school, they're on those other teams. I'm sure those guys talked throughout the week about this game and they're looking forward to it all year long, so from that standpoint, it's different. Then the fanbase, you get excited, you get upbeat, there's a sense of urgency and a sense of passion behind the game, it's just different when it's a rivalry."