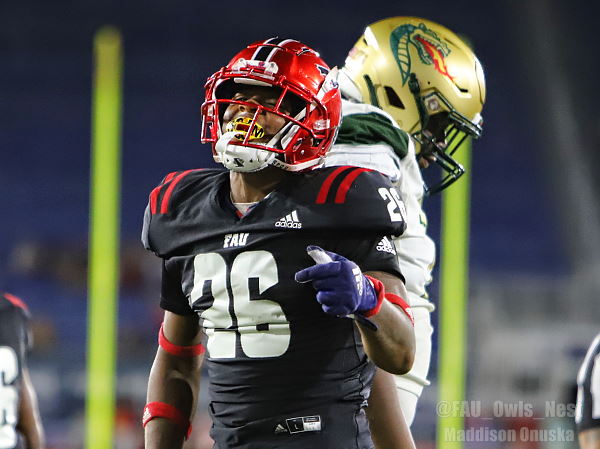 FAU football held off UAB on Saturday night at FAU Stadium, upsetting them 24-17, while moving back above .500 in Conference USA play. The win also puts the Owls back on track in their quest to amass a final record that would enable bowl eligibility.

"I thought our guys did a great job of not turning the ball over", said Head Coach Willie Taggart. "And we were having fun and competing. And then discipline. That's a big one too when you talk about selfish penalties. I think our guys did a good job of that; I think we only had five penalties. We accomplished those keys."

Morgan Suarez got Florida Atlantic (4-5, 3-2 Conference USA) on the board first, connecting on a 20-yard field goal with 3:37 left to go in the opening quarter. With 50 seconds left in the frame, N'Kosi Perry found a wide-open Johnny Ford down the right sideline for a 35-yard score and a 10-0 lead.

After being held to just 37 total yards in the first, UAB (4-4, 2-3 C-USA) nearly doubled that on the first play of the second, a 63-yard scamper by DeWayne McBride to cut it to three. The visitors' next drive went 99 yards, ending on a short scoring completion to TJ Jones to flip the scoreboard in favor of the Blazers.

The opening drive of the third saw Perry scramble for 13 (with an unsportsmanlike conduct penalty tacked on), and the very next play, he hit Je'Quan Burton in stride and into the end zone for 50 yards to regain the lead at 17-14. After a UAB punt, FAU put together a 90-yard touchdown drive  highlighted by a 45-yard Zuberi Mobley run and a Perry-to-Ford connection for 19  that culminated in a catch in the back corner of the end zone by Tony Johnson from eight yards out.

UAB made it a one-score game again with 1:18 left to go in the third on a 32-yard field goal. The Owls' 14-3 advantage in the period was a stark contrast to the season, as coming in, they'd been outscored 63-31.

The Blazers' attempt to answer was putting together a drive lasting almost nine minutes. But on 4th-and-3 from the FAU 15 with 5:11 to go, Jayden Williams broke up a pass over the middle to turn the ball over on downs.

UAB's final possession began with 2:15 left on their own 26, and a fourth-down conversion near midfield, at 1:17, kept the drive alive. Two more first downs moved the ball to the 23-yard line, but three straight incompletions set up 4th-and-10 with eight seconds left. The final play was a pass attempt into the end zone broken up by Michal Antoine, Jr. to seal the win for the Owls.

"If we do that week in and week out, we have ourselves a winning football team", Taggart said.


After a bye week, the Owls will next travel to FIU for Shula Bowl XXI on Saturday, November 12. Kickoff is scheduled for 7:00 PM and the game will be broadcast on Stadium.