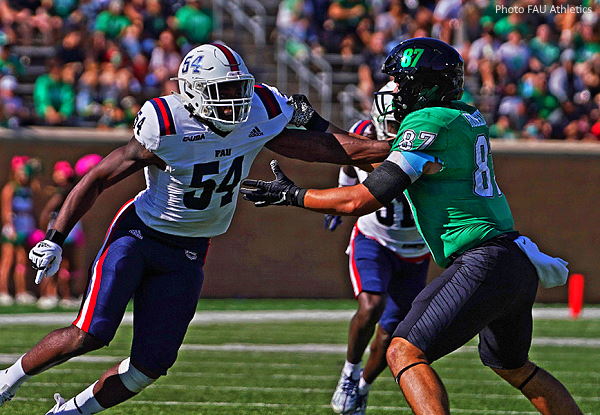 FAU football fell by a score of 45-28 to North Texas on Saturday in Denton. The Owls will head into their first bye week at 2-4 overall and 1-1 in Conference USA play.

The two sides traded touchdowns early in the first quarter. UNT scored on its opening possession before N'Kosi Perry responded with a 12-yard touchdown run to tie it at 7-7. The Mean Green then went on a run that left the Owls with an uphill climb.

UNT drove 80 yards to the Owls' goal line and converted a two-yard touchdown pass from Austin Aune to Jyaire Shorter on the first play of the second quarter. FAU marched to the brink of the red zone, but a missed field goal resulted in an empty possession.

The Owls' defense forced a three-and-out, but Perry was picked off on the ensuing possession. UNT's Ridge Texada returned it 58 yards for a score (21-7).
North Texas led 28-7 when the Owls made a mad dash to get back in the game just before halftime. This time it was the defense delivering the scoring play. Teja Young picked off Aune and returned it 64 yards to the house.

The Owls would get the ball back on offense one more time with 1:14 before intermission. Starting from his own 20, Perry would lead a seven-play drive in just over a minute to bring his team back within a touchdown. After connecting with Wester for 32 yards over the middle, Perry hit Larry McCammon in the flat and the junior running back took care of the rest. He eluded two tacklers in open space and then one more at the goal line as he went airborne and extended the ball inside the pylon to complete the 35-yard catch and run. FAU went into the break down just 28-21.

UNT had the ball out of halftime and immediately marched 71 yards for a touchdown to reassert a 35-21 lead. Perry was again intercepted by Texada on the Owls' next drive and this time the Mean Green corner took it back to the one-yard line. UNT punched it in for a score on the next play.

The Owls stared down a 21-point deficit yet again but continued to battle. LaJohntay Wester hauled in his eighth touchdown reception of the year  this one on a 4th and 5 from the UNT 13-yard line  to make it 45-28 early in the fourth quarter.

Later in the quarter, the Owls' defense made a key stop on third down to force a UNT punt but a 'running into the kicker' call gave the home side a fresh set of downs. With time not on the Owls' side, UNT would hold the ball for another four minutes and eventually add three more points on a 43-yard field goal.

"I feel like we left somewhere around 20 points on the board with the dropped passes. For a football team that's looking to win on the road, we've got to have those. Those are the guys that we count on daily. We can't give up 300 yards rushing the football. And then we can't throw two interceptions for touchdowns. That's a killer. We gave them 14 points right there. That's the difference in the ballgame. Three dropped balls, two pick-sixes. It's hard to win that way. When you're on the road, we've got to play better."


The Owls will return to the field when Rice visits Boca Raton on October 15th.