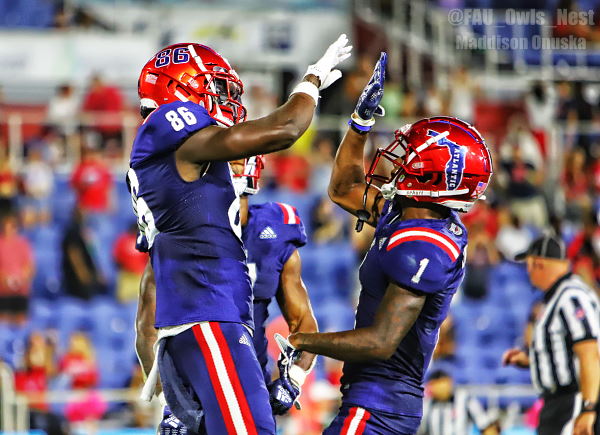 Florida Atlantic University football edged out Rice University 17-14 on Saturday night. After falling behind early, the FAU defense buckled down and stifled the visiting Owls to earn win number three on the season an snap a three game slide in the process.

Rice got off to the quicker start with touchdown drives on two of their first three possessions. FAU responded early in the second quarter. Johnny Ford broke off a 34-yard run to get the home side into Rice territory. Later in the drive, Larry McCammon punched in a five-yard rushing touchdown to cap off a 10-play, 78-yard drive.

The remainder of the first half was dominated by the FAU defense with sacks to end three separate Rice drives, plus an interception late in the half by Romain Mungin. The home Owls held the visitors to a 1-for-5 clip on third down. The defensive dominance would continue in the second half.

The defense forced a three-and-out to start the fourth quarter and the offense took over from its own 37. On 3rd-and-8 from the Rice 18-yard line, N'Kosi Perry connected with Jahmal Edrine (photo left) in the back right corner of the end zone, giving FAU its first lead of the night.

Rice had three drives in the final 11 minutes of the fourth quarter but came up empty each time. First, they drove to the FAU 7, where Dwight Toombs II intercepted TJ McMahon in the end zone. On the next drive, it took just two plays for Armani-Eli Adams to pick McMahon off, this time with an over-the-shoulder catch on an attempted 40-yard pass. Finally, on a 4th-and-4 play with just over a minute remaining, Mungin came up with a clutch pass breakup to seal the victory.

"That was a great win against a good football team", said Head Coach Willie Taggart. "It probably wasn't pretty, but it was good and it felt good. It was good to see our guys improve on the various things that we needed to and we got the results that we're looking for. Great win for the Owls; we're going to celebrate for 24 hours and onto the next one."


The Owls will head back to Texas next Saturday for a meeting with UTEP in El Paso. Kickoff is set for 4:00 PM and the game will be available on the ESPN+ streaming service.