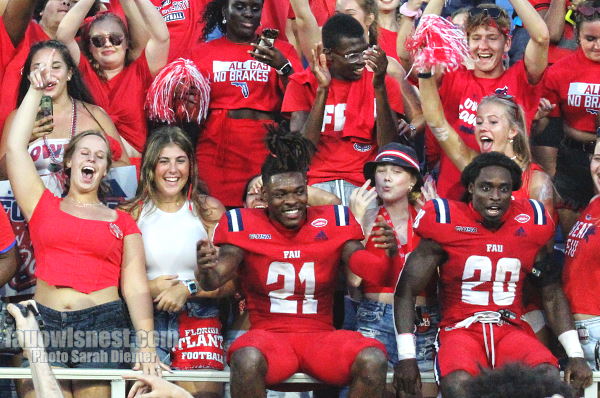 The Florida Atlantic University and Florida International University athletics departments have inked a four-game series beginning in 2024. The FAU-FIU game was named the Shula Bowl before the first contest in 2002.

"We are happy to be able to continue the history and tradition of the Shula Bowl through this series," said FAU Vice President and Director of Athletics Brian White.

"The culture of sports and football in south Florida is important and the Shula Bowl game is a meaningful piece to that. Geographic proximity helps drive fan interest in college sports nationally and certainly here in south Florida. With all these factors combined, we believe this series is great for our student-athletes and our fans."

The Shula Bowl, named for the legendary Don Shula, originated when FAU's inaugural coach, Howard Schnellenberger sought to name the first game played between what he hoped would be a bragging rights game between south Florida players. Schnellenberger, who served with Shula at several stops including as offensive coordinator for NFL's only perfect season, called Shula and pitched the idea.

The FAU Owls would square off against FIU, then under direction of inaugural head coach Don Strock, who was a quarterback for the Miami Dolphins coached by Shula. The two schools have faced off as FCS and as FBS members of the Sun Belt and Conference USA. The 2024 meeting will be the first with FAU and FIU affiliated with different conferences.

FAU holds a 15-4 advantage in the series.

)
Oh Good, that guarantees us 4 wins right there.

posted Sep 27th 2022, 1:50 AM
Meh, Having it at FIU just ensures noone attends. Bethune-Cookman or FAMU would draw more fans just with the halftime show.
By ROwl2007

posted Sep 27th 2022, 9:27 AM
but traditions are the core of college football, and they are our oldest rival. Beating them every year brings a smile to my face.


We played Bethune-Cookman and it did not move the needle in attendance.
By voss749


Yes but we didnt owe them an away game


Wouldn't you rather play fiu away than buffalo or Ohio u?  I mean I live in Ohio so great to see them til we sucked , but a closer away game helps the school more


What does have to do with attendance?

We draw more fans with FIU and it showed during last year's game.
I rather drive 45 minutes to see FAU at FIU than driving to 2 hours to see an FCS team

posted Sep 29th 2022, 11:03 AM
As a program with limited traditions, I think it is a fantastic idea to keep a well established rivalry game going. I know we have historically dominated FIU, but it is gives us something to rally around. I love the sprint to the Shula Trophy.

As a program with limited traditions, I think it is a fantastic idea to keep a well established rivalry game going. I know we have historically dominated FIU, but it is gives us something to rally around. I love the sprint to the Shula Trophy.

Agree.  And to me it goes even deeper.

I'd love to see FIU and FAU continue to build their programs.  Infrastructure, investment, coaching, fan base, traditions, etc.

For far too long other programs have built their programs with the talent South Florida provides.  Mostly, due to FAU and FIU (though FAU has made great strides) not being competitive in the categories above.

While I'm aware a % of kids will want to go out of state (and think thats a good thing), many leave due to FAU and FIU not being seen as a competitive/viable option.

Would love to see both of these programs capture more of the S FL talent and be representative of that talent.  Currently college football south of Orlando is far from good.  That needs to change.

Constantly hear things about how S FL highschool talent is head and shoulders above everywhere else in the country.  It's time the college football programs and the results start to reflect that.