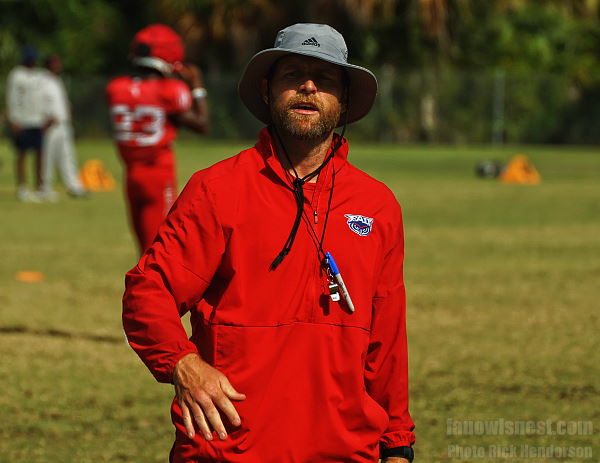 The Owls saw their first day in full pads on Tuesday and emotions were a confirmation that they are looking forward to hitting the field on opening day later this month.

Offensive coordinator Brent Dearmon (pictured) and quarterback Willie Taggart. Jr were on hand to provide some insight on their progression since spring while now a full week into camp.

On a somewhat surprising note, Dearmon's final remark of the morning was related to the quarterback position, where he indicated that the number one position was not secured.

Although, it appears that N'Kosi Perry remains the frontrunner for the season opener at this point.

Here is some of what both Taggart and Dearmon had to offer during their time.

On his approach to coaching

On the progress of the offensive scheme install

""There's a little bit of install still but right now it's more polished. You want guys to be crisper than they were in the spring. You want guys to communicate better than they were in the spring. So, we've tried to really slow it down and let those guys come back for a second time doing what we did in spring ball, getting really good at it. Be elite with the little things, the details, the steps they take, where their eyes are with the path and the track they take.""


On the wide receiver room overall

"I got to see a limited Je'Quan Burton in the spring because he was coming off an injury. He's really jumped out to me. Now seeing him at full speed and seeing BJ Alexander at full stride and hw he can open up…I think our receiver group is much improved. Coach Gonzalez is one of the best in the country. I'm really exited about that room."

"Javion Posey is another guy who is going to come into play, and on the boundary we have a battle going on between Jahmal Edrine and Jamal Young. They are all different in what they bring to the table."


On running back room emergence

"Everyone knows the explosiveness of Johnny Ford and what he can do with the football, he's different than the rest of the room. Then I think we have a group of guys between Larry McCammon, Zuberi Mobley, Kelvin Dean, and Marvin Scott that are battling everyday to be an every down back that compliments that explosiveness of Johnny Ford. We are going to find ways to get him the football, but you can still run all the other stuff too. It's fun to see."


On the quarterback battle

"(N'Kosi Perry) knows the ball, he's knows coverages, he knows concepts. The biggest thing we are stressing to him is pushing the other 10 around him more often. 'You know what you are doing now, you know where your eyes are supposed to be, now push the other 10 around you'.

Will is coming back from an injury, so I got to see a limited version of him in the spring…but now I've seen more explosiveness out of him. He's feeling more confident in playing the game and his progressions. Mike Johnson is an extra running back playing quarterback sometimes. He's 210-215 pounds. Those two guys are pushing each other.

I don't have a number one yet."

On the change of environment for 2022 camp

"Exciting and immerseful, there is a lot good going in this summer, a lot of hard work, and team chemistry has been going up. Coming to work everyday has been a lot easier. More fun, and looking forward to the next day."


On his recovery from injury

"It was humbling, like any injury you learn from and and you build on it until you can't build anymore. Every day I was just stacking bricks and just trying to get back to being me."


On his confidence level under Dearmon

"Just being around him and built my confidence up as a football player. Up hree, four, five notches. I was just going through the spring, but now it's starting to gel for me. He simplifies it, so we are sitting there taking notes and its just like another day in school."

On Dearmon's approach versus prior scheme and approach

"Just understanding what we can do as a unit, and getting our best athletes on the field and getting them the ball at the right time. Just teaching us football overall."

"We are just all on the same page, all hearing the same 'one' voice. Very cohesive, everyday just building more and more."


On how Perry has helped him develop

"Really just seeing him with my team mates. I've been around college football all my life, but he's been 'in' it (longer) so just seeing how he reacts and visual things have really taught me a lot."

FAU will return to the field tomorrow for day seven of camp. Their first scrimmage is scheduled for August 13th.