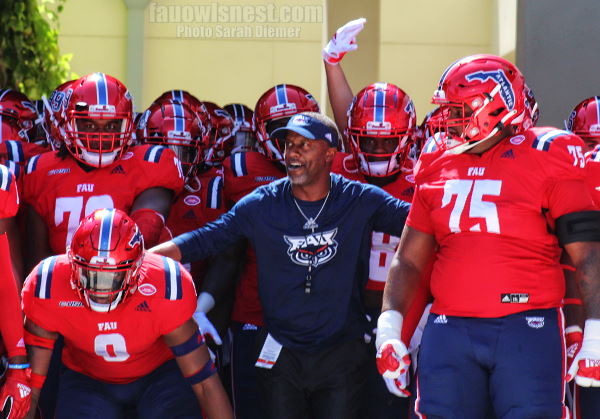 Anderson will begin his third season with the Owls as FAU's starting nose tackle. He enters the year with 61 total tackles over his first two seasons, one a COVID shortened season.

Perry will open his second campaign under center for the Owls. FAU has enjoyed its first summer workouts since 2014 with an incumbent quarterback. He started every game as a graduate student last season, completing 210 passes in 346 attempts for a total of 2,766 yards and 20 scores, while scampering for another four.

Weber returns for his sixth season and will draw his 48th start. He could conclude his playing career with the most starts of any FAU offensive lineman. The FAU record is 50 currently held by Reggie Bain, who played from 2014-18.

Wester's elusive speed has been used in the Owls' offensive attack with 82 career receptions for 816 yards and five scores. He has 12 kick returns to his credit, all in 2020, and a total of 29 punt returns between his first two seasons. Wester has a total of 488 returns yards, with a long of 37 kick return yards and 48 as a career long in punt return. He will continue to be placed in multiple opportunities to touch the ball with his natural ability for an explosive play.

Young, a native of West Palm Beach, will begin his fifth season as an Owls safety. His role has grown each year after tallying 112 total tackles and five interceptions in the last two seasons. Another role that Young will naturally move into is a vocal leader.

The Owls were slated to finish fourth in the 2022 C-USA Preseason poll, which is comprised of both league coaches and members of the media.

Head Coach Willie Taggart, Weber, and Young will travel to Arlington Texas on Tuesday for the 2022 C-USA Media Days before making a quick return to kick-off fall camp on Wednesday as well.

FAU will host Owlpalooza this Saturday beginning at 12:30PM where fans can attend a practice viewing session as well as join in on the autograph session that will follow practice. The event is free and open to the general public.

With all incoming class members on board and accounted for, an updated roster ahead of the official start to camp can be found HERE

The team will open the 2022 season on Saturday, August 27th versus Charlotte at FAU Stadium. The game is scheduled to kick off at 7:00 PM.

posted Jul 26th 2022, 7:52 AM
Evan Anderson is a monster. A bright spot on the defensive front. Looking forward to big things from him this year.