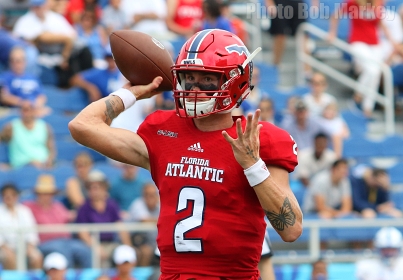 At this point in time, it is unclear whether he will be able to return.

The Texas native made the 2020 Manning Award Watchlist following a stellar 2019 campaign in which Robison threw for 3,701 yards and 28 touchdowns with 6 interceptions. Robison finished the year as the C-USA Championship Game MVP, Boca Raton Bowl MVP, and an C-USA First Team selection, all en route to FAU's second C-USA title in three years.

Moreover, his 3,701 yards surpassed the program's single season passing yards record, originally set by Rusty Smith with his 3,688 in 2008.

With these awards and accolades in hand, Robison was widely accepted as a top-five "Group-of-Five" QB by multiple outlets as the Owls head into 2020.

The star signal caller has had his share of off-the-field issues during his collegiate career. A four-star prospect out of (Mesquite, TX) Horn High School, Robison enrolled early to Oklahoma in January 0f 2017. He was arrested for public intoxication just months later, the day following OU's Spring Game. He was dismissed from the Sooner program later that Summer.

Robison found his way to Boca Raton, joining a slew of other highly touted former "Power-5" players that followed Lane Kiffin to FAU. After sitting out the Fall of 2017 due to NCAA transfer rules, Robison was on a "day-to-day" suspension following a violation of team rules in the Spring of 2018.

Most recently, Robison was the center of a sexual assault investigation led by the university's Office of Equity, Inclusion, and Compliance (EIC) in the Spring of 2019. Kiffin suspended Robison for the entirety of Spring practice that year. No criminal charges were filled and the EIC's investigation cleared Robison of the charges against him before the 2019 season began.

Going into the 2020 season, the starting quarterback spot was Robison's to lose. This is despite added pressure from fellow redshirt-junior Nick Tronti and underclassmen Cordell Littlejohn and Javion Posey. True freshman Willie Taggart Jr. is on campus and could throw his name in the mix if he does not redshirt.

With Robison's future at stake, Tronti is the now the only QB to have seen substantial playing time under center. He found the endzone four times in 2019, twice in the air and twice on the ground. One rushing score included a massive game-sealing drive against Western Kentucky, a game that propelled the Owls into the C-USA title race.

Out of high school, Tronti was tabbed as 2016's Mr. Florida before becoming an Indiana Hoosier. He returned to the Sunshine State to join Kiffin the same year as Robison.

FAU recently made national headlines with the commitment of four-star QB Shedeur Sanders. If he signs with the Owls, Sanders will not be available to play until 2021.

)
That stinks. The kid is very talented, on the QB watch list. Hope its temporary. Wondering what happened.

You know, I like Tronti. After I finished yelling at an open screen, my partner said, "Tronti is the one like JJ?" And now I have to assume, at some point, I compared Tronti to Jaquez Johnson…

Is it too much to ask, are we're doing this for the sake of tradition? Obviously not. So it goes.


I like that comparison. Both can be powerful runners when need be.

posted Oct 12th 2020, 8:30 PM
About Robison. Isnt it odd that theres still no word on what happened. I do think some people here know and arent saying anything.

Is Robison a deep cover CIA agent now? I mean whats going on? Is he an agent and came up with a new identity? For crying out loud this is ridiculous. So were never going to know?

posted Oct 13th 2020, 8:36 AM
All I know is he has not transferred INTO another program. Very odd unless he is sick, has major mental issues or just does not go to classes which ya MUST do!

With his talent and numbers he would be quite a pick-up for almost any program and THAT has not happened - something is seriously wrong with this picture!!! And I still hope Chris gets his act together, for HIS benefit, not for football anywhere.

posted Oct 13th 2020, 8:56 AM
I'm wondering if it's some medical thing.   Addiction and in rehab or other mental disorder demons

And if that is the case , the school wouldnt legally be allowed to disclose the reason


None of the above.


None of the above.


Well if that is the case , it should be revealed

posted Oct 13th 2020, 11:16 AM
What about Hosea Barnwell? Seems like he left our program for greener pastures but never turned up on another teams roster.

Unless your truly elite or there are truly extenuating circumstances it is best to stay put.

posted Oct 13th 2020, 1:35 PM
The only thing that I can think of is that maybe theres an ongoing case against Robison. The fact Rick hasnt denied it yet means that might be it.
By Local Owl

posted Oct 13th 2020, 1:43 PM
The fact that rick hasn't said anything shows he is a professional. There is an old saying my father used to say. "It's none of your damn business. Now get over it ". What ever Chris has going on is between Chris, his family ,and his god. I alway hope that a young person learns and grows because they have a long life ahead of them. I miss chris. And i hope he is well.

posted Oct 13th 2020, 2:04 PM
No one asked Robison to be in the public eye. I dont know if Ive ever seen someone this high profile or anyone for that matter be off the team for no publicized reason.


I understand and totally agree with you. But as I understand it the original team can take the player back if they get no bites. I would think Taggart would welcome him as he is in a position of need and would probably be a day 1 starter if not on the 2 deep at the very least.

Obviously I dont know the details. Maybe Taggart has a policy about this or maybe it had to be done by a certain time.
By rob2313

posted Oct 14th 2020, 8:28 PM
It's got to be ultimate rejection to go into the transfer portal and nobody wants to give you an S'ship.   It will be good long term to the sport since lessor players no longer take up a roster spot.   Once you put in the paperwork for the portal, the team does not have to take you back so lessor players will just give up the sport or go as a walkon.


I understand and totally agree with you. But as I understand it the original team can take the player back if they get no bites. I would think Taggart would welcome him as he is in a position of need and would probably be a day 1 starter if not on the 2 deep at the very least.


I hope that ship has sailed. He didnt take full advantage of this opportunity the first time. Time for us to cut bait and move on.

)
Couple things on Chris, both from firsthand experience and things I heard last season and this summer.

Chris had a very good support system last year, both inside the team and outside of it. The staff and powerful people at the school were VERY commited to Chris not having any repeat incidents. People Lane trusted checked in with Chris at practice, afterward, etc., to see how he was doing.

Thats not to say Lane leaving directly threw Chris off the deep end. Dont get me wrong. Just saying everything was here in place for him to succeed under the last staff.

I want to emphasize there were no illegal benefits or anything like that. Thats not what I mean. I mean that Lane and people he trusted made sure Chris was OK and making smart moves.

I dont know the specifics of why Chris isnt around here anymore. Taggart told the TB Times in September that it wasnt the football teams decision to part ways. Take that how you will.

posted Nov 6th 2020, 8:11 PM
I really hope Robison can come back for 21 and 22 as the starter. The little thats been divulged from people like Rick is that it hasnt been ruled out he can come back.