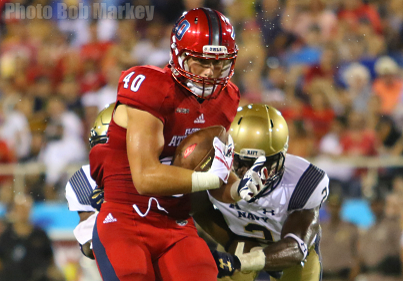 Harrison Bryant turned 22 on April 23. Just one day after, he was named the Florida Atlantic University Male Athlete of the Year. Now on Saturday, he has been selected in the fourth round of the 2020 National Football League draft by the Cleveland Browns. Bryant was the 115th pick overall.

Bryant, the most highly decorated player in FAU footballs 19-season history, became the 10th player since 2010 to be drafted. That total is the most of any Conference USA member. Historically, he is the second FAU tight end to be drafted with Rob Housler, who was taken in the third round and 69th pick overall by the Arizona Cardinals in 2011, being the first.

Bryant, as the 2020 John Mackey honoree, became FAUs first individual national award winner and also was a unanimous All-American. The tight end tallied 148 career receptions, 2,137 yards and 16 touchdowns in his four years. He was instrumental in the Owls Conference USA Championships in 2017 and 2019 and was a guiding force in FAU securing Cheribundi Boca Raton Bowl bids in the same seasons.

With the selection, Bryant became the 10th FAU player selected in the NFL Draft, the first in 2020 and is the first to be drafted by the Browns, despite several Owls seeing time with the Browns in recent years. He is the second player from a Conference USA member school to be taken in the 2020 draft.