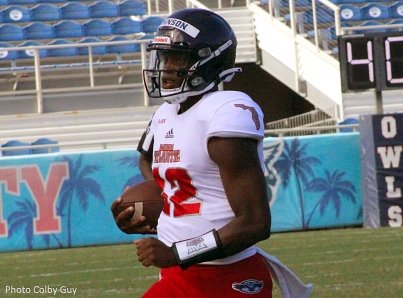 On an emotional day for the for Owls nation after the news of former head coach and program founder Howard Schnellenberger FAU's football final spring scrimmage team, Coach John Bills, overtook team Coach Chris Perkins, 23-18. While it was not all perfect, both sides played a mostly clean game that featured big plays, good defense, and much-improved quarterback play.

Quarterback Play Showed Improvement - After a season of inconsistent quarterback play, the spring game had plenty of encouraging signs for the 2021 Owls. Quarterbacks Nick Tronti, Micheal Johnson Jr., and Willie Taggart Jr. led scoring drives during the game. Johnson had the best day statistically, completing four of five passes for 100 yards. Nick Tronti was efficient, going nine of fifteen for 81 yards. Taggart Jr. started slowly, but led two scoring drives in the second half. The most important stat of the day was the quarterbacks combined for zero turnovers.

Explosive Plays Return - One of the biggest flaws of the Owls 2020 offense was the lack of explosive plays. Drives continuously had to go multiple plays forcing the offense to convert various third and fourth down to put points on the board. "You go to have explosive players to have explosive plays,'' said Taggart after the game. Today explosive plays were aplenty; transfer quarterback Michael Johnson Jr. (photo above) kicked things off with a 56-yard pass to Aaron Young on his second drive as quarterback. He later connected with wideout TJ chase for a picture-perfect 31 yard fade to the front pylon for another six points. New running back Johnny Ford exploded for a 75-yard touchdown pass from Willie Taggart Jr.

Young Players Stood Out - Due to the unique circumstances of seniors being able to return for an extra season, it will become ever more challenging for young players to climb the depth chart. Still, the spring game had young players showcasing their talents all over the field. Newly enrolled true freshman running back Zuberi Mobley had multiple nice carries, including an 11-yard touchdown run to kick off the scoring in the game. "When I get momentum, it's over'', said Mobley after the game.

Notable Hold Outs - It was expected players like John Mitchell and Rahmod Smith with injuries from the year prior would not be playing in the spring game. Still, it appears the Owls coaching staff was being extra cautious with the holding out of Malcolm Davidson and Larry McCammon, who had been practicing this spring. Both backs have long injury histories missing multiple games over the last two years. Keeping both healthy will be pivotal for the Owls in 2021.

Kicking Up and Downs -  In an overall good day for the Owls, the one glaring weak spot was the kicking game. "We gotta' find a kicker", said coach Taggart said in the post-game presser. Owls kickers missed a field goal an extra point and had a punt blocked. FAU's kicking spot opened up in the offseason after Vladi Rivas entered the transfer portal after going eight of ten on-field goals in 2020.

The Owls football team will now head into a long offseason before returning to camp in August to begin preparations to take on the Florida Gators on September 4th, 2021.

)
I want to circle back to another small interesting thing I saw during the spring game.

Chase Lasater was used some on the edge as an stand up pass rusher.

This is a bit of experiment to see what he can provide out there with them needing to replace McCarthy's production.

It is also a move that appears to be anticipating Leroy's return and trying to create ways to have both talented players on the field at the same time.