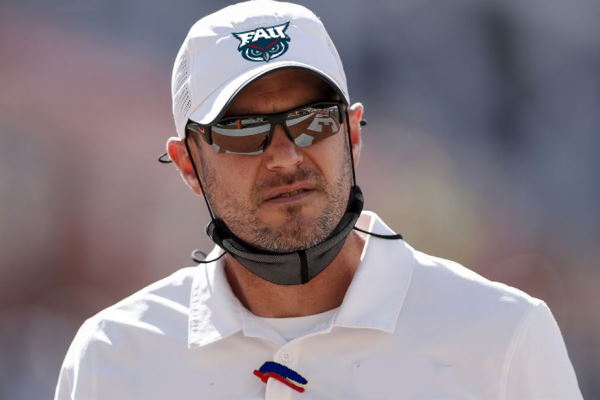 Herman has served as head coach at both Houston and Texas, compiling a 54-22 overall record. He has led his teams to six bowl games in six years as a head coach and is undefeated as a head coach in the postseason. In addition to his head coaching success, Herman is known as a prolific recruiter and offensive mastermind, coaching numerous high-powered offensive units throughout his career.

"It is an honor to have the opportunity to lead the Florida Atlantic football program," Herman said. "I'm incredibly grateful to Brian White, President Kelly, Mary Giardina and everyone else who was involved in the search process. All the pieces are in place at FAU for us to be successful. There are already great young men on this team, great facilities, a great location, a great recruiting base and great leadership, all of which are important to building a successful program."

White said Herman immediately stood out throughout the search process.

"We are incredibly excited to welcome Tom Herman to Paradise," White said. "Throughout the process and the more we talked with Coach Herman, the more it became apparent to me that he was the right person to lead our football program. Beyond his knowledge of the game, which is obvious by his success over the years, he also truly cares about the young people in his program. He has coached winning programs everywhere he has been and we believe he can be tremendously successful at FAU as well."

Herman's most recent head coaching stint was with Texas, where he coached the Longhorns for four seasons (2017-2020) and compiled a 32-18 record. He also has National Football League experience, serving with the Chicago Bears in 2021.
Texas had four consecutive winning seasons and four consecutive bowl wins under his leadership. Herman's Longhorns boasted Top 20 offensive units in scoring and total offense in both 2020 and 2019. His quarterback Sam Ehlinger became just the third Longhorn ever (along with Colt McCoy and Vince Young) to compile over 4,000 yards of total offense in 2019.

In 2018, Herman led the Longhorns to a 10-4 mark, a Sugar Bowl victory and a Big 12 Championship Game appearance in just his second season at the helm. The 2019 Allstate Sugar Bowl marked Herman's second appearance in a New Year's Six Bowl Game in just four seasons.

Prior to his tenure at Texas, Herman served as head coach for the 2015 and 2016 seasons at Houston. With the Cougars, Herman put together a 22-4 record. In his first season at UH, Herman led the Cougars to an 11-1 record that concluded with a victory in the inaugural American Athletic Conference Championship Game, a 38-24 win over Florida State in the Peach Bowl and a No. 8 ranking in both major polls. Herman was named First-Year Coach of the Year by the Football Writers Association of America in 2015.

In his second season at Houston, the Cougars were 9-3 with victories over Oklahoma and Louisville, which were each ranked No. 3 at the time. UH boasted the No. 15 defense in the nation and the No. 34-ranked offense when Herman left UH to take over at Texas.

Prior to his arrival at Houston, Herman helped develop record-setting and explosive offenses in each of his 10 seasons as an offensive coordinator, including three seasons as offensive coordinator and quarterbacks coach at Ohio State where he won the 2014 Broyles Award as the nation's top assistant coach. He helped the Buckeyes win the 2015 College Football Championship (following the 2014 season). Herman's offense in 2014 accomplished all that with a pair of backup quarterbacks. In fact, Herman led freshman backup J.T. Barrett to a fifth-place finish in Heisman voting following the 2014 season.

Herman, who was named the 2013 Rivals.com Big Ten Recruiter of the Year and national Top 25 recruiter, arrived in Columbus after spending three years as the offensive coordinator and quarterbacks coach at Iowa State.
During his time at Iowa State from 2009-11, Herman's well-balanced offense was very evident as Iowa State quarterback Austen Arnaud ended his career as the Cyclones' No. 2 all-time leading passer with 6,777 yards and 42 touchdown passes, while running back Alexander Robinson finished his Iowa State career as the Cyclones' fourth all-time leading rusher with 3,309 yards.

Herman spent 2007 and 2008 as offensive coordinator at Rice before heading to Iowa State. During his two seasons with the Owls, his offenses broke over 40 school records and, in his second season, the Owls won 10 games and went to a bowl for the first time since 1954.

Prior to Rice, Herman directed offensive attacks for two years (2005-06) at Texas State, where Bobcat squads led the Southland Conference in total offense. The 2005 Texas State club was eighth nationally in scoring and made a run to the FCS semifinals in the school's first appearance in the Division 1-AA playoffs.

Herman began his coaching career in 1998 as a wide receivers coach at Texas Lutheran, before serving as a graduate assistant at Texas in 1999 and 2000. He worked four years (2001-04) at Sam Houston State, helping the Bearkats to two conference titles, as well as quarterfinal and semifinal berths in the FCS playoffs.

Make a deposit today to lock in your spot with Coach Herman at FAU Stadium.