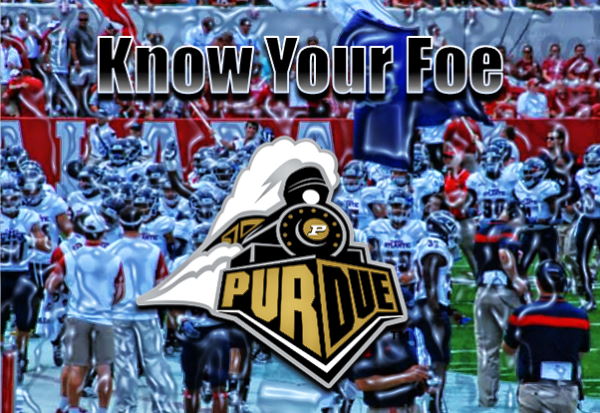 The Owls are on the road for what could be their toughest opponent of the 2022 season in that of Purdue. In a mutual and meaningful exchange, we had the opportunity to connect with Boilermaker beat writer Travis Miller, who offered a lot of good insight on the West Lafayette foe.

For more on Boilermaker football you can find his work at Hammer and Rails on the SB Nation Network. You can also follow Travis on twitter at @JustTMill. And now, lets get to the questions.

You have an NFL caliber wide receiver in Charlie Jones. The Owls will have their hands full defending him. What do you think can be done, if anything, to slow him down?

"Jones has been a very pleasant surprise so far. He didnt put up big numbers at Iowa and was more well known as a returner. When he transferred in I thought we were getting a return ace who might catch a few passes. Now he has picked up right where David Bell and Rondale Moore left off. He has had a great rapport with childhood friend Aidan OConnell and has not been slowed down through three games. He has a similar body type to Bell, but he is quicker."

He got a little dinged up early against Syracuse, but you cant argue with the numbers right now. He is second in the nation in receiving yards, first in total receptions, and second in touchdowns. He is currently ahead of what Bell did last year at this time, which is very impressive. Syracuse managed to bracket him for most of the game, but he still broke loose for a big touchdown late.

Along the same lines, many hold that quarterback Aiden O'Connell will be a player on Sunday's as well. He has a 68% career passing mark for the Boilermakers. What's made him so successful at the P5 level of play?

"His development has been astonishing. He started by coming in as an injury replacement third stringer in 2019 and led fourth quarter game-winning drives in the first two games where he saw significant action. He might not have seen the field that year if Purdues top two quarterbacks hadnt gotten injured, but he got an opportunity and seized it.

Around midway through last season he got over an interception bug and has been on fire since. The ugly pick-6 he had at Syracuse was only his fourth interception in the last nine starts hes had. He has gotten away from making those mistakes and he knows how to spread the ball around, while still thriving with a genuine go to guy like Jones. He is now Purdues all-time leader in completion percentage by a wide margin, which is very impressive considering the history we have at the quarterback position. He is currently on pace to have the best passing season statistically in school history, better than Drew Brees, who I hear had a career of some note."

Who are some players that have become key contributors for the Boilermaker defense?

"Junior safety Sanoussi Kane has been a very pleasant surprise, especially when Jalen Graham was lost for a few weeks with an injury. He leads the team in tackles with 17 and has been all over the place. Cam Allen and Chris Jefferson have also both returned interceptions for touchdowns so far. The defensive line has been salty led by PinceJames Boyd and Jack Sullivan. They were able to hold a solid Sean Tucker mostly in check last week, and Tucker is one of the nations best running backs.

I havent had a lot of complaints about the defense, really. They have been solid against the run. Against Penn State there were some very poor tackles that led to big plays, including a game-changing long touchdown just before halftime, but for the most part they have been okay. They arent an elite unit, but they are serviceable as long as the team is not making big mistakes."

Brohm's WKU teams were consistently innovative on offense, scheming guys open left and right despite on paper not having the best talent. Has the old three-yards and a cloud of dust Big Ten football infected his DNA or has Brohm's offenses live up to the hype?

If anything our fans want a little more of a running game. For the most part his running game has been very bad the last two years. Zander Horvath missed a lot of games last year due to an injury, and he was by far our best rusher. He ended up being a 7th round draft pick and has already caught two TD passes for the Chargers this year.

Whats telling is that his best backs were either holdovers from the previous coaching staff early in his tenure or they are walk-ons. The inability to run the ball effectively, especially to kill the clock, was critical in the loss to Penn State. Despite having two possessions with the lead in the final five minutes Purdue only had one running play. If it had been able to run effectively (or even if it had just run directly into the line and fell down) it probably wins. Against Syracuse aside from a 15 yard TD from Devin Mockobee the ground game really struggled against a defense more geared to the pass.

There is no question this is a pass first team. OConnell is going to chuck it and rack up 300-400 yards per game. We need more of a rushing threat, even if it is merely 100 yards per game as a team."

In the first and third quarter, Purdue has outscored their opponents 58-10. Is this a statistical anomaly or is there something to Purdue's success to start the game, and open the second half?

"I have been pleased with it, but this is a team that really should be 3-0 right now if not for self-inflicted wounds. Against Penn State Purdue lost a critical fumble on a critical play where it had gained a first down in field goal range and looked like it was about to go into the half with a score. The defense then had a horrendous missed tackle that led to a 60 yard TD catch and run with two seconds left in the half. That was a huge 10 point shift in a game we lost by 4.

Then there was the Syracuse game. Despite a bunch of mistakes like a missed field goal, a blocked extra point, a pick-6, and a late hit penalty that kept a TD drive alive, Purdue still had a four point lead after scoring with 51 seconds left. It then committed a whopping SEVEN penalties the rest of the way, including a pair of unsportsmanlike conduct penalties after the touchdown that made us kick off from the 10, a pass interference, and a defensive hold. Syracuse threw six incompletions on its game winning drive, but Purdues dumb mistakes kept them alive.

It is frustrating to be 1-2 when we very easily could be 3-0. This team has beaten itself twice, so if it can get over that hump I like our chances because we have done well to start halves."

Prediction time, how do you see the game playing out?

"Its homecoming and a night game, so there should be a decent crowd. Despite being 1-2, I still think were a good team and the schedule is relatively favorable the rest of the way. We need this game before a tough back-to-back at Minnesota and Maryland. I want to see this team clean up the penalties and the tackling. FAU will be a much better test than Indiana State two weeks ago. You guys have some real athletes that were part of power 5 programs and a solid quarterback. I think Purdue pulls away late, but I would not be surprised if FAU hangs around longer than we expect."