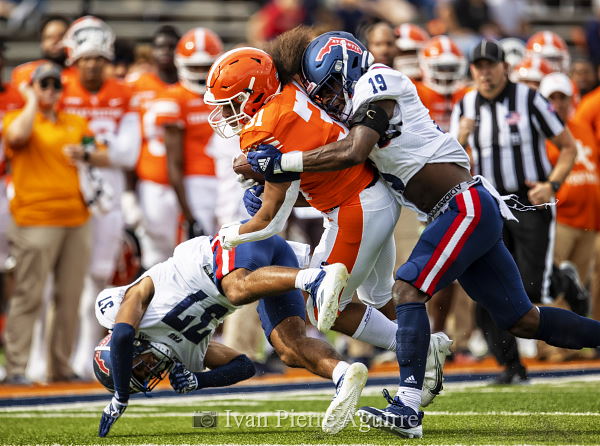 FAU football was edged out 24-21 on a last second field goal by UTEP on Saturday afternoon. The Owls are now 3-5 overall 2-2 in Conference USA with four games left in the regular season. They will likely have to upset at least one opponent, and possibly two, to place themselves in a bowl eligible status.

It was a slow start offensively for both teams until a UTEP field goal early in the second quarter finally broke the ice. The Owls would get on the board late in the first half when Larry McCammon broke off a 32-yard touchdown run to make it 7-3. The Miners added another FG in the final minute to send the game into halftime at 7-6 FAU.

The offenses traded empty possessions to start the third quarter before Teja Young came up with a big play for the Owls. The redshirt junior intercepted Miners QB Gavin Hardison and returned it 72 yards for a pick-six. It was Young's second INT returned for a score this season.

UTEP would bounce back quickly though. It took the Miners just three plays to respond after running back Deion Hankins got loose for a 72-yard run. Hardison capped the drive with a five-yard run on the next play. The Miners were successful on the two-point conversion to tie the game at 14.

The Miners mounted another scoring drive to take a 21-14 lead early in the fourth quarter. With seven minutes left, the FAU offense needed to deliver. A 15-yard penalty on 2nd-and-1 looked as though it might stall the drive, but Perry looked Jahmal Edrine's way, and the redshirt freshman came down with a highlight reel catch for 18 yards. A 25-yard pass to Johnny Ford moved the Owls into the red zone. On 1st-and-10 from the 17, Perry took a big hit but delivered a strike into the back corner of the end zone where Austin Evans came down with it. The initial extra point attempt to tie the game was blocked but a UTEP player was penalized for continuing to play after losing his helmet. Morgan Suarez's second attempt was good to knot the score at 21.

UTEP took over with 4:36 remaining and methodically marched down the field into FAU territory. A 13 play, 65-yard drive culminated in a 27-yard field goal as time expired.

"We need to score more points, you can't score 14 points and expect to win the game at this level", said Head Coach Willie Taggart. "The opportunity was there, and we didn't capitalize on it. We have to look at what we're doing and most importantly, make sure we're getting the ball in our playmakers' hands. We have to be better overall. We have to coach better, and we have to play better."


The Owls next return home to host UAB, who lost a narrow contest against WKU Friday night. The game is scheduled for a 7:00 PM start and will be broadcast on the CBS Sports Network nationally.

Special thanks to Ivan Pierre Aguirre for providing our game photo.

posted Oct 24th 2022, 9:29 AM
I'm just going to say I don't know how WT keeps saying the same things, like "we need to score more points" and expect to be taken seriously as a HC.